Dan Cummins isn't really "Crazy with a Capital F," because that's not even gramatically correct. But he does have a new stand-up comedy CD with that title in stores now, with the Comedy Central special of same name debuting Saturday and full-length DVD to come in June.

Earlier this month, Cummins joked about getting quoted by ABC News. "Finally, I've been quoted extensively by a legitimate news source," he wrote, "about buying things while drunk. Perfect." Actually, it's a perfect segue to his opening routine from "Crazy with a Capital F," which is about getting surprise gifts for yourself while you're drunk. Roll the clip!

Cummins also shares his dark outlook on greeting cards, learning he has an opinion about polar bears, an even stronger thought about Garfield (the cartoon cat, not the former president), playing musical instruments, and more. 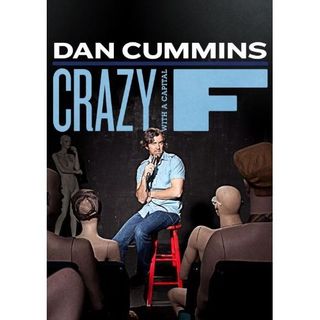 Cummins told me this week that the CD is available as a digital-only download, which means you don't get to stare at his "Crazy with a Capital F" cover imagery. "I'm hoping to get a physical copy somehow. I'm a big fan of visual artwork," he said. For his previous release, he went with a clown theme that he called "a little creepy but funny." For this one? "We took it a little further with this production. Full of mannequins and dolls, old-timey dolls and then me performing to that audience."

Though he spent most of his life and comedy career in the Pacific Northwest — and recorded the new special in his city of Spokane — he made the move to the Los Angeles scene around Christmas following a divorce.

How did you feel about living far outside of both NYC and L.A. as a working comedian? "Everything I got before was while I was still living in Spokane. I thought maybe I could have done a little more, not necessarily in stand-up, living here." He'd already done The Tonight Show, Live at Gotham, and Last Comic Standing, among other credits. Being near Hollywood affords him other opportunities. "I want to get into more writing, so I've been working on show concepts and pitches. That's almost impossible to do from Spokane. Hopefully this special will correct me somewhat." He jokes about correcting his career to get big quick. "But God, it's been a tough road, trying to find a shortcut down here, that's the plan. Where's the shortcut? How can I make a lot of money and not work? That's the next special."

So you didn't give any thought to doing Last Comic Standing again? You were so close to being a finalist the last time they did the show in 2008. "No. I didn't know about it. And then I talked to my manager and debated it. After the last one, I think I kind of burned that bridge. It was weird behind the scens stuff. The year before, I had moved on from Minneapolis…I didn't even know this, the first year they took more people than they were going to take, so they called me up and said, 'Sorry.' And then I talked to my manager and they said they wouldn't do this to me again, and they said, 'Sorry, we're not going to do that to you again,' and then they did. They cut me and then two days before the taping (in Vegas), they reinstated me. I had to have my wife ship me clothes in Las Vegas so I could perform, and then there was this weird sympathy." Why? Because they also told him he wasn't advancing to the finals. "And they said we're going to give you one more set."

Let's lighten it up a bit, then.

You tag a lot of your jokes on "Crazy with a Capital F" with titles. Such as joking about cats, then saying:  "That joke's called I like cats, I just like making cat people sad a little more." How did you decide to start titling your jokes? "I remember the club I did it, in Omaha, the Funny Bone. You know what. I was thinking about marketing, about how bands do it. How their songs don't have to mean anything. It can be complete nonsense lyrics, and it can have a complete nonsense title. I remember listening to Smashing Pumpkins. They had that hit, 'Bullet with Butterfly Wings.' What did it mean? It didn't mean anything. Each of the songs they just sounded cool. It just started off with that one joke. I'm going to give my jokes crazy titles that dont mean anything. I said, this last joke I told was gerbil with a wooden eye, or, then I paused, or how about petroleum jelly is the wrong kind for a sandwich. And then they laughed a lot more at the second part, so I said thank you test group. And then I'm always dicking around with different techniques, so I added it to a couple of other jokes, and it just gave me an excuse for an extra tag." He said the club owner in Omaha encouraged him. "Then I stopped doing it. I wasn't going to do it anymore. Then Chad Daniels, this good buddy of mine, I was gearing up for the taping and he asked me to do it, so for the taping I just came up with titles for them."

Not that he's tied to it, he adds: "I've got about 40 minutes of jokes since the special, and I haven't named any of them."

Why not? "I feel like in a bad way I'm gimmick resistant, so I'm not tied to anything. I don't want it to wear on people's nerves. we get it."

Would you compare it to something like Jim Gaffigan's inside voice, maybe? He does it, but not all the time. "Yeah, yeah, he'll do it and then go 10 minutes without it. It's not like people are sick of that voice he does. You know, it all just came randomly."

For a non-random experience, listen to or watch Dan Cummins in "Crazy with a Capital F."

One thought on “This Dan Cummins interview is called “Crazy with a Capital F,” and so is his new CD and DVD”