When Miley Cyrus quit Twitter, it made news, but we're not sure why, since her claims of privacy were trumped by her YouTube video rap, which wasn't very private at all. When Michael Ian Black quits Twitter, it's strictly business. Funny business. Black has joined Lisa Cohen in creating a comedian version of Twitter called WitStream.

The site is up and running in beta already, but informally launches with a live stand-up comedy show on Monday, Nov. 2, at Comix in NYC, with performances by Black, Michael Showalter, Pete Holmes, Josh Fadem, Morgan Murphy at Baron Vaughn. 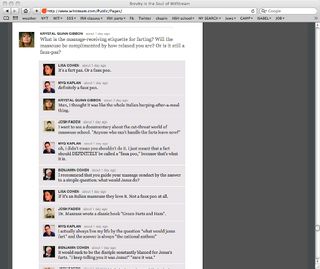 One way WitStream hopes to stand out vs. Twitter is how it makes running conversations easier to follow than @replies, such as this example (see inset at left) following one woman's query about fart etiquette.

They're all representative of the kinds of funny people WitStream wants to be in business with, sharing short bits of comedy and starting dialogues. The launch press release noted that "founding contributors" also included Rainn Wilson, Al Yankovic, Mike Birbiglia and Rob Corddry, and mentioned that Black would be leaving behind his 1.36 million Twitter followers @michaelianblack, hopefully bringing them with him over to the new site. "WitStream is like going to a party with the funniest people you know without leaving your house or dealing with their annoying problems," Black said. 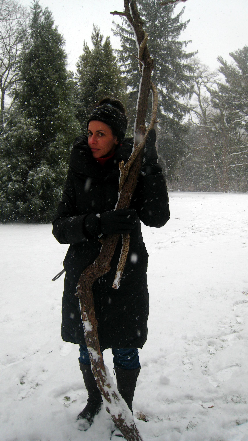 I InterSpoke with WitStream founder Lisa Cohen about her new venture, and competing with Twitter — which launched a new feature called Twitter Lists last night that seems like a response to services such as hers.

"My response to the lists is this: At the end of the day it's still a lot of proactive work dumped into the lap of the user/reader. Yes, they can now make lists out of those they are following, but what if that total list is small and boring to begin with? It takes a lot of insider knowledge to find the good ones in the first place.  And let's say someone is engaged enough to have a following list as inside-comedy as mine. They also have co-workers and community members and politicians and chefs they want to read on Twitter, so who's to say the comedians will be heard above all that noise? They're too good at this, they deserve their own space, and by living all together they're helping each other gain broader exposure."

I first met Cohen at this summer's Just For Laughs festival in Montreal. How has her gameplan changed in the three months since then?

"I could spend about another six months making everything perfect featurewise, and I still have a long list of everything I want to do, but it's at a place where we can put it out there and see how people like it," Cohen said. "It probably hasn't changed that much. I put it live just before Montreal just because I knew I was going to be talking it up. Back in July I had maybe 30 people on there. Now I have maybe 100. It's been a lot of signing up people, perfecting things, getting the bugs worked out, learning things from use. It's a living, breathing thing that's always evolving, so you have to learn how people use it. I now have a thing called spotlight."

The site also spotlights each member with a profile page that includes a bio, schedule for upcoming live shows, and pages for them to share videos, reviews and sell merchandise.

"One of my many problems is the double-edged sword that is Twitter," she said. "It's the quickest way to describe what I'm doing and what micro-blogging is. On the other hand, there are people who hate Twitter and won't go on it. I have comics who go on WitStream and love it and they won't go on Twitter. Twitter has this code. It has its own little language with the hashtags. It's not very friendly to non-users. If you don't speak that language — I think by creating threaded responses, it allows people to read it so you're not hashtagging. It's an easier introduction to the medium."

How did Michael Ian Black get involved? "We just approached him. We were able to get in touch. We knew he was a great writer and likes to do a lot of different projects. And he's mentioned in all of those articles about who to follow on Twitter. He sees it as the art form that it is, and the big change in communciation that it is. Not just everybody is good at it."

That's where Cohen feels WitStream can help. "I'm bascially the filter in between the creators and the audience," she said. "With Twitter, people like it because it's democratic. People have the same rights and the same tools. Not everybody in the world is as talented enough to broadcast and to publish. I think people are finding the same thing with YouTube. Everybody has come around to, it's too much, there's too much crap out there. I don't know how to dive in. We're the Funny or Die is to YouTube as Witstream is to Twitter."

"Most people are annoyed by it. What do I care that you're going to yoga class? But the comedians who can write…their brains are perfect for this medium. Our goal is not necessarily to replace, but to supplement the notepad and the pen that comedians walk around with. They write it on WitStream. This becomes their notepad."

"At the end of the day it's entertainment. I don't think we are competing with Twitter. It's massive and they serve so many masters. So many people are using it to put their recipes out and people having conversations about their needs. There are so many things going on. It's going to go the way of MySpace. There's too many things going on. There are third-party overlays to Twitter. Anybody can
ultimately (do this) — that's what the aggregators are. They create little channels within Twitter. I think the ability to comment on one another's posts…it's not friendly to the medium…the reference point may be two hours before and you lost it. And you don't know why these people are being followed. That's my job. Maybe they liked Doug Benson the one time they saw him on Best Week Ever. But do they go to their computers and hit 'follow'? I'm trying to make it accessible to everybody so they don't have to do that work. You don't have to know anybody's name or to go to Comedy Central."

So Michael Ian Black is officially quitting Twitter, though? How will will that work? "What we are doing is calling it going dark. He is still on tour and we have our show on Nov. 2, and it will probably be after the show. I have no question in my mind that he a has a million followers…from what i know of Twitter, plenty of them are marketing things. I said something about Tommy Hilfiger products, and 20 minutes later I got a notification that Tommy Hilfiger was following me — and Twitter has a crazy number of, there are a large number of people who set up an account on Twitter, touch it once and never look at it again."

"We'd like to have an audience, and be the home for them. It's a community and everyone's going to have a profile page and set things up. We'll have a calendar. That's the other problem with Twitter. Because it's so huge, it's become purely a promotional tool. But the problem with that model, you watch television because there's 22 minutes of programming and eight minutes of commercials. You put up with that.  There are penty of comedians who are just saying, 'Check me out check me out check me out!' The content is going to go away. People will leave if there's too many commercials. I'm not sure what Twitter's model is. For some reason they're valued at a billion dollars."

So what's your business model, then? "We're looking at ways to add things. You can see more pictures, you can buy their CDs, and with each of those interactions, we can basically charge a fee.
Twitter is just people chatting. Everyone on WitStream has something to sell. We cluster them all together. You can just read and get to know the names. You see their names over and over again. You see their faces. It's also great for people who are relatively unknown."

How did you pick these knowns and relatively unknowns? "Word of mouth. There are some people that Michael asked. He just pitched us to them and they like it. And others are people I've liked, or worked with in the past."

Will all of your comedians be leaving Twitter, too? "The truth is, there's no mandate. I'm not telling anybody they have to produce a certain amount. It's for their entertainment," she said. "We set it up so
some are posting on Twitter, and we are pulling them from there…Twitter makes it possible so anyone can do it. We could have done that, frankly. Pulled them and not given them any awareness. The flip side of that is we can also push to Twitter. They can post directly on WitStream and we can push it to Twitter so they're not neglecting their followers. Some are saying I'd rather do something different on WitStream than I'm doing on Twitter. We want to do it so people don't feel like they have to do something extra."

One thought on “Can WitStream outwit Twitter? Lisa Cohen and Michael Ian Black hope so, for comedy’s sake”