Dan Pasternack became IFC's VP of Development and Production in February, in a press release from the cable channel that noted IFC had "restructured its original programming team with Pasternack leading the department‚Äôs efforts to develop a more robust slate of original scripted comedies and irreverent non-fiction programming." In late March, the channel announced it had joined production on an upcoming British sitcom starring David Cross, acquired the new Canadian miniseries from Kids in the Hall, the first TV series from The Onion, and a broad slate of series in development, all under a new branding tagline: "Always On. Slightly Off." 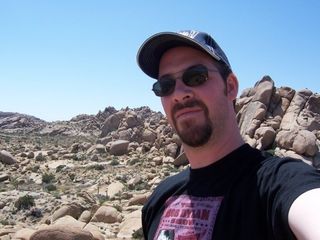 That also is an apt tag to hang on Pasternack, whom I met three years ago at the final HBO Aspen comedy festival, where he was recruiting talent as head of content creation for then-new, now-defunct SuperDeluxe.com (since folded into Adult Swim). He recently took some time to talk to me about where he and IFC are heading, and what it means for comedians and comedy fans.

How are you settling into the new gig? "I'm commuting back and forth," he said. "I moved from L.A. to Atlanta for Super Deluxe, bought a house and sunk some roots in the earth, and then Super Deluxe went away right when the real estate market cratered."

What were you doing before taking the job at IFC?"I was working on a Starz series called Gravity (it debuts April 23, after Party Down). I executive produced that show. It's a dramedy about a group of people who are all suicide survivors. It's not a straight-ahead comedy. It's very nuanced. It has Krysten Ritter in it. She's the female lead. Ving Rhames. Rachel Hunter. And then tons of people from comedy who you'd know in guest roles…Robert Klein, Anne Meara…I think it's a really bold and unique show. I was doing that with Gravity when I came into IFC to actually pitch a show, and that turned into, hey they're looking for an executive to head up their development of original programming. I've honestly never had a job in terms of the timing and the fit of where they're hoping to do and where my passions and skills all come together, where it's just so perfectly. I'm really thrilled to be there. And it gets me out of Atlanta. So that's my story."

As for the big news made in late March, Pasternack said much of that credit goes to IFC's acquisition side. "We're just acquiring and broadcasting because we feel it's very much in line with where the IFC brand is moving. It's a very fortuitous thing…with 'Todd Margaret,' it's an even more interesting evolution, because it's something that David Cross and Shaun Pye wrote for Britain and Channel 4. It's truly a co-production where IFC is taking the lead. Since coming on board, I've become the co-executive on the series, and we're going to be shooting six episodes including some reshoots for the original pilot. I think it'll have its world premiere on IFC. I think we have that in advance of its premiere on Channel 4."

"David is already a presence on air, with Arrested Development, which has proven to be a key acquisition in helping define the direction of the IFC brand. And I think David's work, and that doesn't belong anywhere more than at IFC.
We're really being hands-on with the making of the show. And it's been great. It's been a wonderful collaboration on the show."

Why did you need to reshoot the pilot? I heard there's a different character? "There's one actor who just wasn't available for when we were scheduled to go to production for the series. The character of Todd's office mate is being replaced, just because the actor who was in the pilot when it was being filmed, isn't available now. Will Arnett and Sharon Horgan are still in it. Spike Jonze will be reprising his role. What the comedy nerds have seen, they should know that we are not betraying David's original intended vision for a second."

What can you tell me about the bigger picture of rebranding IFC and how the new comedies will fall in line with that? "Part of why I feel so lucky, everybody is so in sync with what our brand is. It all feels very much part of the same sort of genealogy. Even if you look in that direct line of Monty Python to Kids in the Hall to Whitest Kids to what David did with Bob Odenkirk did with Mr. Show, it all feels related to me. It's silly and smart. It's unashamed to be silly. And it's unafraid to be smart. If you're trying to pin down what we are in comedy, that's it. And no one has really owned this space yet. I think a large part of it comes from the fact that IFC is really rooted in the spirit of independent film. So I think a lot of what IFC is doing, compared to what Comedy Central or Spike or Adult Swim is doing in comedy, feels specific to us, it feels like it's already in the DNA of the channel. It's not so much of a leap. It's very much a natural part of the evolution of the channel. IFC is still going to be showing movies such as Pulp Fiction and Office Space. but in terms of comedy, this kind of alternative comedy now has a place to call home, too. We've got that tagline of always on, slightly off. This kind of alternative comedy is ultimately perfect for us."

How much street cred do you bring to the table, then, based on your experience with the comedy scene, albeit briefly, online via Super Deluxe? "I hope that's a bilateral process of osmosis. I believe that IFC already has it's own street cred. But if I can bring anything that can help out, great. I can point to all the stuff we did with Bob Odenkirk or Brad Neely or the Maria Bamford Show and it feels like it exists in the same comedy universe. So there's an overlap with the target audience and the cool DIY kind of aesthetic from what we did on Super Deluxe. But I'm also mindful that it was a different medium. I also know how effective the web can be as a laboratory to incubate talent and ideas. Look at The Onion News Network. The Onion was a clear brand and a voice in print. And then they took the next logical leap to doing great content online. The next logical step for The Onion News Network was as a television show. I will continue to look to the web for great talent."

Kids in the Hall's eight-part miniseries, Death Comes To Town, makes its U.S. debut on IFC in August 2010. The six-episode debut of The Increasingly Poor Decisions of Todd Margaret premieres in the fourth quarter of 2010. Ten episodes of The Onion News Network begin airing in the first quarter of 2011.

As for series in development?

Animated series that takes place during biblical times, with the added Creationist bonus of dinosaurs, combined with Jesus in his early 20s while he‚Äôs still figuring out what he wants to do with his life. ‚ÄúI Love the A.D.‚Äôs‚Äù is being developed by Ed Productions (Crossroads Television) with executive producer Dan Lindau, animator JJ Sedelmaier and writers Kip Madsen and Geoff Bunch.

A comedy series that revolves around the four members of ‚ÄúVariety Shac,‚Äù an all-female sketch comedy troupe. ‚ÄúVariety Shac‚Äù is being developed by executive producer Brian Stern and is created by, written by and starring: Shonali Bhowmilk, Heather Lawless, Chelsea Peretti and Andrea Rosen.

Set in New York City, this scripted workplace comedy takes place at the East Village branch of the Manhattan Department of Labor‚Äôs Unemployment Office as a downsized dotcommer becomes an unlikely civil servant. ‚ÄúJobbed‚Äù is being developed by writer Steve Elliott.

Comedian Greg Behrendt hosts a weekly chat with famous comedians about their careers and how they‚Äôve achieved success. The guest comedian then chooses several of his favorite emerging comics whose performances are highlighted throughout each episode. The series is shot at the Steve Allen Theater in Hollywood, Calif. ‚ÄúThere Might Be Cake‚Äù is being developed by Avalon Television with executive producers Dan Lubetkin and David Martin.

Host/travel book author Broke-Ass Stuart, who gets under the skin of ‚Äúthe city you didn‚Äôt know you lived in,‚Äù taking viewers on underground cultural adventures in cities across America. Proving that the best things in life don‚Äôt cost a ton of money, Broke-Ass Stuart unearths cool and fascinating subcultures and experiences that make these host cities excellent places for the young, broke and beautiful to have fulfilling, low-rent vacations or lives. ‚ÄúYoung, Broke & Beautiful‚Äù is being developed by 44 Pictures; Sam Erickson executive produces.

“Heckle U” with Owen Benjamin and Kirk Fox

One thought on “IFC’s Dan Pasternack on what the cable channel’s rebranding means: more alt-comedy on cable TV”