The live North American tour for Conan O'Brien and company debuted last night in Eugene, Ore., and both press and fans were there in force to document and spoiler alert the whole thing! 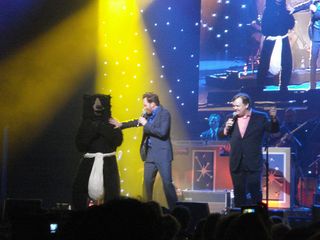 Among those filing early reviews and recaps were The Hollywood Reporter and The New York Times, as well as locally by the Eugene Register-Guard. Team Coco also has its blogger Aaron Bleyaert filing reports from the road.

Reggie Watts is onboard as the opening act and apparently gets a solid half-hour and then some to razzle dazzle audiences with his musical comedy genius.

But there's plenty of music to follow from Conan and his band (except no Max?). Here's a fan clip of Conan performing "I Will Survive" with some changed lyrics. The tour continues through June.