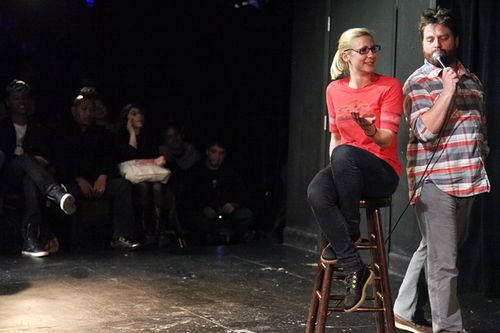 From my friend Mindy Tucker comes this snapshot from Monday night's Whiplash show at the UCB Theatre in NYC. After surprise drop-in appearances by Martin Lawrence and Bobby Slayton turned out to be fake-outs by guest host Sean Patton, Patton introduced Zach Galifianakis to the crowd. Galifianakis is back in the city filming the second season of HBO's Bored to Death. This one rowdy British woman, who was more than eager to bound onstage when challenged by Galifianakis, needed a bit of a dressing down. So he made jokes at her expense and, at one point, literally spun circles around her.

CD preview: Flight of the Conchords

2 thoughts on “Pic of the day: Zach Galifianakis gets a case of Whiplash, and spins circles around a rowdy Brit”