Comedian and musician Dave Hill may be "Big In Japan" (that's his one-man show, which is on again tonight at the UCB Theatre in NYC, coincidentally! also March 11), and may also be big on NPR (I heard him on the car radio as I drove my dad across Pennsylvania the other night, and Dave is big enough that Ira Glass didn't even to say his last name on This American Life!), but he has something even bigger in mind for this coming Friday, March 5, 2010. 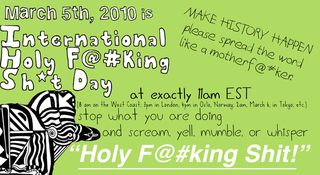 He calls it International Holy F@#king Sh*t Day. Look out, Improv Everywhere. Because this isn't about inciting global panic, but rather the polar opposite. As he explained on his blog yesterday:

"So here‚Äôs the deal — on Friday, March 5, 2010 at exactly 11:00am Eastern Standard Time in the United States (that‚Äôs 8:00am on the West Coast; 4pm in London; 5pm in Oslo, Norway; 3am, March 6, in Tokyo –sorry for keeping you up so late! — etc. You can find the exact time in your area here), stop what you‚Äôre doing and scream, yell, mumble, or whisper ‚ÄúHoly F@#king Shit!.‚Äù If someone near you does the same thing, you must look at each other and either wink, give each other a military salute, kiss on both cheeks (like the people of France), and/or — if it feels right — pat each others‚Äô butts (like the people of France). And if someone around you says ‚ÄúWhat?‚Äù or something to the effect of inquiring as to why you just said ‚ÄúHoly F@#king Shit!‚Äù, you must respond by saying ‚ÄúOh, nothing‚Ä¶‚Äù, ‚ÄúWhat?‚Äù, or even ‚ÄúHuh?‚Äù and then just get back to whatever you were doing. It‚Äôs that simple."

I asked him about it last night. "Yeah, it just hit me as something fun and ridiculous to do and see what happens with it," Hill replied.

Yeah, let's see what happens! You can check out the IHFS Day Facebook group, and this fan-made flyer.

Lewis Black’s Root of All Evil