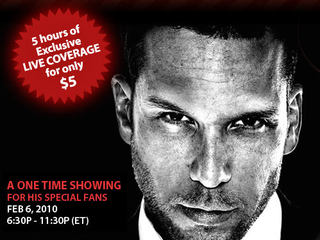 Ustream has hosted millions of live streaming Web shows and series. A quick look at Ustream's entertainment section pulled up 251,628 separate listings, with plenty of comedians among them. They've all been free, but that will change Feb. 6 with the first pay-per-view offering, which takes fans behind-the-scenes of Dane Cook's final stop on his current stand-up comedy tour.

The one-time offer "for his special fans" at https://www.ustream.tv/danecook boasts "5 hours of Exclusive LIVE COVERAGE for only $5," presumably from the BankAtlantic Center in Sunrise, Fla., where Cook and his opening acts will close down his Isolated Incident Global Thermo Comedy Tour. I'm also going to go ahead and guess that Cook will be chatting with fans from backstage before and after the show — and maybe even during it for a few minutes? — as well as getting his opening acts into the mix.

Would you pay $5 for something other people are offering currently for free? That has been the question of the Internet age for anyone who provides unique content.

How much would you pay to watch a live online show?

How much would you pay to read an online blog?

UPDATED: Dane Cook posted some additional news on this front. He has turned it into a contest, even, with people who buy tickets by Jan. 29 eligible for prizes. Prizes? Yes, prizes. The prize being a free trip for two to attend the show in person with all-access privileges. For everyone else, if you watch the Ustream feed, you'll get to see Cook's sound check, participate in a live Facebook chat (couldn't you do that part on Facebook? anyhow), pre-show chatter, access to his opening acts, the full show, and an after-party.