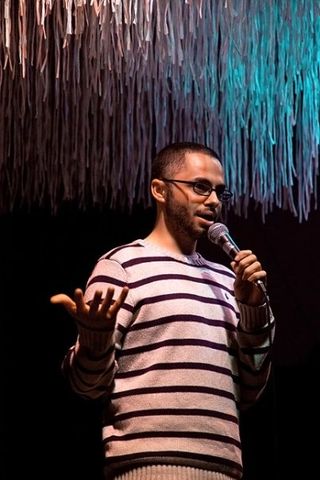 People in the New York comedy scene already know that Joe Mande is an emerging comic — heck, he won an award with that very title two years ago at the ECNY Awards. Today, Mande has emerged into a bright, young stand-up worth watching in the years to come. How bright? Bright enough to know how to make Andy Rooney watchable (this past weekend's edition of The Andy Rooney Game is up), bright enough to sell a book idea based on pictures of idiot hipsters (Look at This F*cking Hipster is available for pre-order, and due out in March 2010), bright enough to be on Comedy Central's Live at Gotham, and bright enough for me to know he should get more ink in this space. So let's get to it! With comedy partner Noah Garfinkle, Mande hosts the popular Totally J/K show; and solo, he has put up a one-man show based on his time working for Maury Povich. Find out more, right here, right now.

When and where did you start performing comedy? I guess I started as a teenager in Minnesota. I used to do an open mic at a comedy club in the Mall of America called "Knuckleheadz." I was also in a high school improv troupe called "Clownaz." A lot of my early comedy ventures ended with a "z." But I think I started for real during my junior year at Emerson College.

What was your best credit before moving here? I was in a big article in the Boston Globe entitled "Will the Next Jay Leno Please Do Stand Up?" which, as a headline, I found to be a little back-handed. So there was that…and one time Gary Gulman told me I was funny after a show.

Why did you pick NYC over LA or anywhere else? I think I was destined to be a New York Jew. Even as a kid, I saw myself growing up to be either the starting point guard for the Knicks or the anchor of Weekend Update. I suppose I'm still waiting for one of those things to happen. I've never seriously considered living in LA. I've resented that city ever since I was rejected from the USC screenwriting program in 2001.

How long did it take to get your first paid gig in NYC after moving here? I don't remember. I mainly do "alternative" rooms, so I usually get paid in drink tickets.

How is this scene better/same/worse than the scene you moved from? Boston was the ideal place for me to start out. I really learned to get comfortable doing stand-up at the Comedy Studio in Harvard Square, because the crowds were always super smart, supportive, and patient. When I first got to New York, I thought I made a huge mistake. I had no idea what I was doing. I was performing at the worst, most depressing open mics in the city. It was a complete nightmare. But eventually I found Rififi (may it Rest in Peace), UCB Theatre, all the little shows in Brooklyn, and I suddenly felt at home. New York is the best.

Do you already have an "only in New York City" moment yet? I got my picture taken with Maury Povich while I was high on PCP. Does that count?

What tip would you give to any comedian who moves here? Be patient, write funny jokes, and don't be a weirdo.

Where do you see yourself five years from now? Starting point guard for the Knicks or anchor of Weekend Update.

Where can you see him until then? Today is Dec. 23, 2009, and you can see Joe Mande perform tonight at Big Terrific inside Cameo in Williamsburg; on Christmas Eve, he'll be part of 92YTribeca's Twelfth Night of Chanukah comedy show. Totally J/K's next date at the UCB Theatre in NYC is Dec. 30. And in January, you can see Mande in Florida as part of Comedy Central's South Beach Comedy Festival.

Comedy Central hasn't uploaded Mande's Live at Gotham set yet, so please sit back and enjoy his 2008 performance as part of CollegeHumor Live, and imagine him a year older and wiser. Roll it!

3 thoughts on “Meet Me In New York: Joe Mande”