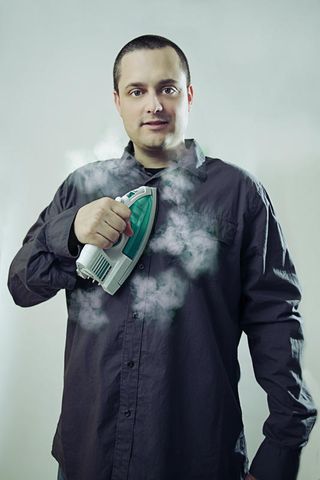 Today I'm going to introduce you to Nate Bargatze, who has a mouth from the South (and the rest of him hails from there, too), has performed on Late Night with Conan O'Brien, Comedy Central's Live at Gotham, as well as Just For Laughs in Montreal.

When and where did you start performing comedy? I started January of 2003. I am from Nashville, Tenn., but moved to Chicago to start comedy. I was there for a couple of years, went back to Nashville for a couple of months and then moved to NYC with another comedian, Sven Weschler.

What was your best credit before moving here? I got a review in a newspaper in Chicago were I was described as a "pudgy Southerner."

Why did you pick NYC over LA or anywhere else? I was already in Chicago and knew a couple of comics that had moved here. New York also has a lot more stage time and I knew NYC is where I could get better faster with the stage time and being around so many great comics.

How long did it take to get your first paid gig in NYC after moving here? About a year

How is this scene better/same/worse than the scene you moved from? Chicago has a great scene as does Nashville. But the stage time is the main difference that makes New York the best in my opinion. Also you can go watch some of the best comics out there every night and it keeps pushing you to get better.

Do you already have an "only in New York City" moment yet? I got sprayed with mace when I first moved here by a supposedly blind man. This guy brought a seeing-eye dog into a diner one late night and was knocking silverware off the table and cussing very loudly. They asked him to leave and when I went outside he was still there. I just got to NYC from Nashville so still had the "that ain't right attitude" and confronted him about it. He then sprayed me in the face with mace. Now I don't talk to anyone no matter what they are doing.

What tip would you give to any comedian who moves here? Perform as much as possible and also hang out. Go to every show you can go to. The clubs, alt rooms, road gigs and watch comics and meet comics. In New York there are so many comics and they are all at different levels. There is not a question you can have that some comic knows the answer to. The great thing about New York is you will go to a room and perform and there will be guys with Comedy Central half-hours and guys that just started.

Where do you see yourself five years from now? Frustrated with my career and giving tips to comedians on why they shouldn't have moved to New York as I sit in a club waiting to do a check spot. Big Things!

Where can you see him in NYC now and in the near future? Today is Nov. 24, 2009. Tuesday Nov 24th I will be at Comix in NYC performing with the cast of my podcast "it could be better." You can also go to www.natebargatze.com and find other shows and subscribe to the podcast. The podcast includes me, Yannis Pappas and Chris Laker. It's a cool podcast where we interview Nir Rosen, a war journalist who was kidnapped by the Taliban, and also Gary Clegg, the creator of the Slanket. He was the original blanket with sleeves and then the Snuggie guy stole his idea. Hear all about it and more on our podcast 'it could be better‚Äô on iTunes!

You know how I said Bargatze has performed on the TV? Well, here is an example of just such a thing. Roll it!