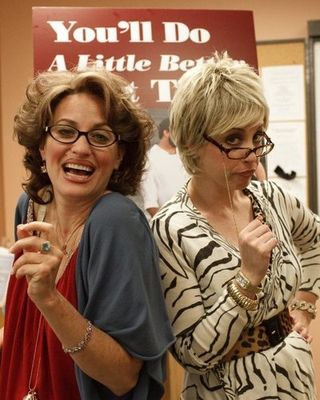 The Jews already have a story about a Hanukkah miracle, with oil lasting eight crazy nights. Can a pair of Boston Jewish ladies stage another miracle by turning their TV pilot on Showtime into something more, with only two airings planned after midnight at the end of the year? Ask Ronna and Beverly, who are doing just that with the screen adaptation of their long-running UCB Theatre stage show, in which they create and promote their new guide to dating, "You'll Do A Little Better Next Time." They've gotten plenty of their funny friends to spread the word in the past day on Twitter and Facebook (Rob Corddry, Rob Riggle, Thomas Lennon, Nick Kroll, Paul Scheer, Jackie Clarke, Eliza Skinner, Brian Huskey and Dan Levy, among them). Will it get you to watch? More importantly, will it get the show picked up by Showtime or another network? Let's ask them. So I did.

Here's Beverly (Jamie Denbo), whom Ronna (Jessica Chaffin) said replied with "wicked smart" answers. Does it matter that their characters are Jews from Boston? Denbo, a Boston native, said the location choice "is so specific and funny for some reason." Learn more, now!

How did you and Jessica get the show from there to Showtime?
Because of the growing popularity of our stage show (in both LA and
NY, primarily at UCB) over about two-and-a-half years, we felt it was
time to try to pitch it as a TV project. We knew we would need to
team up with a great showrunner and since Jenji (Kohan) was already a regular
Ronna & Beverly fan who had been to many live shows, we asked her. We
were beyond thrilled when she said yes, of course.

Did Jenji want to help you two develop the pilot because of loving you two on Weeds? (Denbo played "Raylene" in season five of the Showtime comedy, and Chaffin also has appeared on the show) Haha! Actually, we both got the Weeds gigs because Jenji loved us as
Ronna & Beverly!

What can we expect from the pilot that's different and/or the same from the UCB shows?
The UCB live stage show is a talk show with celebrity guests. The
pilot is a single-camera narrative that follows these characters more
up-close. It's in the tradition of a Curb your Enthusiasm. And
while the characters themselves are a little over the top, their world
is very real. We like to think of it as a little like a Jewish Ab
Fab.

And what, exactly, is an "amortization move" — I read that in Variety. Those trades can be confusing with their legal slang, can't they?
I think it means that Showtime is just airing it as a one-off for
their own reasons, which aren't super clear to us. Meaning at this
point we have no reason to believe this will lead to a pick-up. That
said, we are trying to make sure as many people as possible see it, in
case a pick-up is something Showtime or someone else would actually
consider.

Is there a certain level of buzz — or more tangible ratings — that you think you need to get from us in the comedy community to convince another network to take a chance on Ronna and Beverly?
Every little bit helps. We really believe that this show has always
had legs. These characters speak to people. We have had celebrities
from Jon Hamm to Jeff Garlin to Paul F. Tompkins tell us that they have
never had so much fun as when they are on stage with Ronna & Beverly.
(I think this means these people like getting harrassed!) Our pilot
had Jenji Kohan and Paul Feig at the helm and they gave it their all.
We really, truly believe there is something there that people have
responded to for a reason, and for that, we will do whatever we can do
to put these two ladies out there. For everyone who has ever had a
mother, aunt, grandmother or friend's mother embarrass them in public,
this is for them.
We hope you enjoy watching it as much as we enjoyed making it. Every
single part of developing and creating this show was a joy for us. We
just want to push it as far as it can go.

Ronna and Beverly airs at 12:05 a.m. tonight on Showtime, and again at the same time on Dec. 29 on Showtime Too.

You can view the Ronna & Beverly videos on their UCB Comedy page, or their Facebook fan page, to see them channel a full level of Boston Jew weirdness with folks such as Joey McIntyre and Eli Roth. For more on that Eli Roth thing, plus the social-media aspect, here's a couple of posts from Mediaite to digest! (Click) Here's a timely video that Chaffin suggested you watch, with Ronna and Beverly visiting a bookstore to see how their book is selling. Roll the clip!