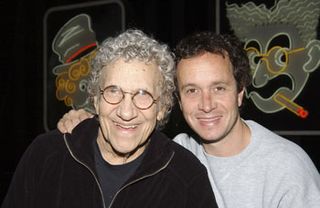 Pauly Shore filed a lawsuit on Monday against his brother, Peter, over actions involving the family's treatment of the comedy family's matriarch, Mitzi Shore, and the ownership of The Comedy Store. RadarOnline talked to patriarch Sammy Shore about it yesterday, and posted the Shore family lawsuit online (misspelling Pauly's name as Pauley!). It looks like nasty stuff — family lawsuits always are, it seems — and among the business contentions, Pauly alleged that Peter tried to (or did) have him removed from The Comedy Store's board of directors.

Sammy tried to put the best spin on it for Radar, telling them: ‚ÄúWhen there is a family business there‚Äôs always gonna be problems,‚Äù Sammy explained. ‚ÄúThis law suit is just a family feud. It will be over in a few weeks, I‚Äôm sure of it.‚Äù Pauly's reps told the tabloid mag that "this is a personal family matter that will be handled privately."

Pauly previously had tried making the family business very public through his reality TV series, Minding The Store, which had a brief run on TBS in 2005.