I first encountered James Adomian before I knew he was James Adomian. At the time, he was playing Gary Busey in a show during the Upright Citizen Brigade's Del Close Marathon in New York City. And he was hysterical. I later saw him pull off a Frank Caliendo impersonation, which is quite meta-tastic. You can see James Adomian's Funny or Die videos or his UCBT-LA profile/videos for plenty of evidence of his talent. If I were putting together a sketch comedy show on TV, I'd cast him in a New York or Hollywood minute. 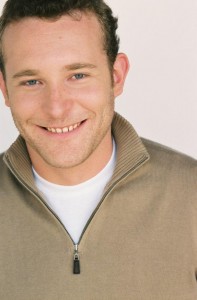 As my brief sojourn into the heart of darkness that is Hollywood, Calif., capital of Business Show, comes to a close this weekend, I thought I'd share a little bit more of James Adomian with you. During my week exploring the Los Angeles comedy scene, I saw Adomian follow Eddie Pepitone onstage at Largo by impersonating Pepitone, along with Lewis Black, Paul Giamatti and more; the next night, he blew away the audience at the Unknown Theatre with a grizzled comedian character named Manny Berg who was so good, one of my hosts didn't even know that it was Adomian. So, this week, instead of presenting you with a "Meet Me In New York" profile, I put the questions to James Adomian for this installment, called "Going Hollywood."

Arrival date: August 1989
Arrived from: Atlanta, Georgia
When and where did you start performing comedy?
There were some very fun years of amateur comedy and theatre in college. Then I beat around the Groundlings program for a while in my late teens and early twenties. I met Josh Fadem there and started performing at his awesome shows at the Ramada basement lounge in Los Feliz. During that time, I joined The Deviants, a gay-oriented alternative sketch comedy group. In 2005, when I was 25, everything took off: I broke into uncredited late-night television and started performing at Garage Comedy and Comedy Death-Ray; that summer, the Upright Citizens Brigade opened their L.A. theatre, which has been my comedy home ever since.

What was your first credit?
My first professional gig, uncredited at first, was playing George W. Bush on The Late Late Show with Craig Ferguson. My earliest short film credit was Vincent Price in Yacht Rock, the celebrated Channel 101 series.

How did growing up in L.A. shape your desire to be in show business?
Though showbiz seemed to me like an impossible and fantastical other world when I was a kid, I slowly realized that I had a rare geographical advantage to do what I loved. When was 14, I started doing impressions of political figures for local talk radio shows (B-1 Bob Dornan was my favorite). Later in high school and college, I became dimly aware that there was an alternative comedy scene on the other side of town, so I started taking the bus out to Hollywood to see shows and take classes whenever possible.

Why did you decide to stay in L.A. instead of going to NYC or elsewhere to launch your comedy career?
Moving to New York has always been and still is a contingency plan. I hate car culture, dry weather and the arrogant illiterati that runs Hollywood. Nor am I a fan of the deliberate dis-engineering that went into ruining this part of the world, from an urban planning perspective. I used to loathe L.A. for all these reasons, and wanted desperately to move away, but I've stuck here because of friends, family and connections, and because people keep coming to my shows and hiring me to do things. So I guess I'm here due to inertia. I've lately come to a grudging respect for this city, but I still wouldn't live here if it weren't for comedy.

When did you start doing impersonations?
As early as I can remember. When I was 3 years old, it struck me as very funny how seriously newscasters would talk, so I used to run around repeating what they were saying at the time, in their stupid grave tone: "More news about the bombing in Beirut, after this!" Dark from the very beginning! As I got older, like anyone with a talent for impressions, I moved on to teachers and coaches, who really are the training wheels for any talented comic impressionist.

Do you have a favorite character to play?
Lately, Christopher Hitchens. I'm also having fun doing Lewis Black, Philip Seymour Hoffman and Paul Giamatti these days. I get bored easily, so I like to keep coming up with new impressions that nobody else is doing, or at least radically new interpretations of impressions that have not been done to death. As far as original characters, I love to play Miss Corona Martini, a filthy bitch who embodies my feelings about drag queen comedy.

Do you feel more comfortable playing characters and impersonations than doing stand-up?
I used to. I come from a sketch comedy background, and I've always had a talent for mimicking people, so that was always a strong factor in what I wanted to spend my time doing. But then there was this fun, strange period in my life a few years ago when people started asking me to play Bush or other characters of mine in their standup shows, so that helped me figure out how to work my sketch talents into the world of standup, with its presentational format. More recently, in the last 18 months or so, I've been doing stand-up as James Adomian, which allows an entirely different and thrilling way to communicate my ideas. I have to thank Greg Giraldo for his blunt advice last year: "You're a funny guy — you should be doing stand-up! What are you wasting time for with all this other bullshit?" Now I'm doing stand-up all the time and I love it — I don't have to drag my bags of costumes around to bar shows anymore!

What is it about that (characters, impersonations) that drew you to it?
I find it uniquely satisfying to make fun of someone through the vehicle of their own personality. It's a way to show, rather than describe, what's funny, strange, evil or loveable about a person. Plus, it's funny and fucking fun to do. I'm a huge fan of Phil Hartman, Phil Hendrie, Peter Sellers, Peter Serafinowicz and other masters of character comedy whose names begin with the letter P.

What tip would you give to any comedian who moves here?
Perform all over the place as often as you can. Check out different styles and scenes. Learn from your heroes and peers without stealing material. Find what intimidates, annoys or scares people and make fun of it. Above all, nothing matters whatsoever, so have fun and get as much free shit as you can along the way.

Where do you see yourself five years from now?
Powering through season four of a television incarnation of The Midnight Show!

If you're in the Los Angeles area, here's where you can see James Adomian in the very near future. Or you can watch him in this Midnight Show video as the late Orson Welles:

Is there a comedian in Los Angeles that you'd like to see me style and profile for another installment of Going Hollywood? Send your nominations to: thecomicscomic AT gmail DOT com

Marlon Wayans on the “Funniest Wins” philosophy, a lack of sibling rivalries and touring with his brothers Keenen, Damon and Shawn

Natasha Rothwell undermines and exceeds your expectations on The Characters