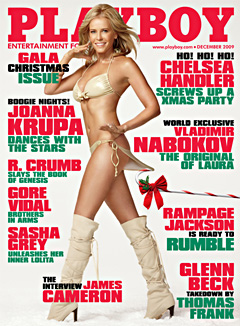 So, remember way back when, this morning, when I posted about ladies who want to be stand-up comedians and would they be worried more about their bodies than their jokey jokes? They were dealing with the possibilities. Chelsea Handler is living in the reality, as she is the new cover girl on Playboy magazine for December 2009; or, rather, someone resembling Chelsea Handler is on the cover.

This is the Playboy cover. Someone doesn’t have to call the Airbrush Police, because Handler called herself out.

This is what she looked like on TV last night on The Jay Leno Show, where Leno unveiled a giant cutout of the cover after interviewing Handler and firing several jokes at her about her older boyfriend, Ted, who just so happens to be the same Ted Harbert who runs Comcast Entertainment Group — which means not only does he also just so happen to be Handler’s boss, but potentially Leno’s new boss, should a rumored sale of NBC Universal to Comcast go through later this year. That was a long sentence, but…

How many levels of awkward is that, exactly?

Anyhow. Handler isn’t just on the cover, she’s also inside Playboy’s pages offering 20 answers to 20 questions, as well as offering her own guide to surviving the holidays (Warning: Links go to NSFW Playboy pages). The magazine itself doesn’t come out in print until Nov. 13.

5 thoughts on “Playboy takes a closer look at Chelsea Handler, and has fun with Photoshop putting her on its cover!”