Comedians like to party just as much as you do, if not more so. Trust me. And yet, you don't see too many comedians who bring their party persona onstage. If you want a party comedian, Nick Swardson continues to be your guy.

For Seriously, Who Farted?, Swardson's new hourlong special (available in different versions on CD or DVD via Comedy Central), he had opening act Beardo and Dirt Nasty (aka Nicholaus Goossen and Simon Rex) riling up the theater crowd in Austin earlier this year with seven minutes of "singing" about getting drunk, doing drugs and having sex. You can see on the DVD as a bonus feature. By the time Swardson took the stage, the Austin fans were hooting and hollering for anything to do with drinking and drugs — to the point where they "woo-wooed" when Swardson started a story about alcohol poisoning ("That's not applause-worthy," he chided them briefly) and booing him when he mentioned that to obey the law, they had to have fake pot on the set of Grandma's Boy.

"I never thought about being a stand-up as a kid," Swardson said, introducing a funny bit about boys who want to be ninjas, and wondering what would happen if we ended up becoming the first thing we wanted to be. Roll the clip!

Watching this reminded me how I once confused Swardson and Dane Cook for each other when they first entered my comedy consciousness (and possibly yours) in 2000. At the time, they both liked to get nostalgic and use physicality to describe their nostalgia. Of course, Cook has become the biggest touring stand-up, staging party atmospheres for 10,000 or more fans at a time. But he famously doesn't drink or smoke. Swardson, meanwhile, jokes at length about his drinking and the exploits it has gotten him into over the years. 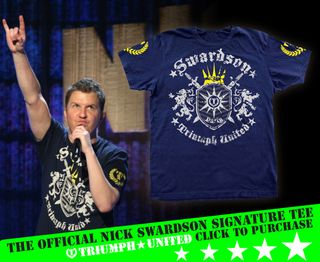 Whereas many comedians will mock the summer blockbuster, Swardson has a bit specifically taking his tsking friends to task. I'm guessing that his notes don't harmonize with the recent comedy chorus against Ed Hardy shirts and the guys who wear them — I'm guessing this because Swardson not only is wearing his own custom Triumph United T-shirt, but also selling it online (and fans in the front row of his special are seen wearing them!?).

Swardson also jokes about his upcoming Comedy Central project, Gay Robot, and the fact that "everybody thinks I'm gay, which is understandable." What's almost as courageous for a comedian in 2009 is seeing a comedian make a joke about MySpace that's not about how MySpace is 2000-late. Instead, he talks about MySpace's sexual preference choices. Not sure? Roll the clip!

The DVD offers more than the CD, including a fake interview in which Swardson imagines himself to be timeless, with visions of how he would have done stand-up in the silent 1920s, swinging disco 1970s, Miami Vice 1980s and Def Jam 1990s. You also get a horror parody called "28 Days Later" and "A Very Terry Christmas," based on Swardson's gay roller-skating character on Reno 911! Although you can watch two of these things right here if you'd like…

Rhetoric with a melody: Owen Benjamin talks comedy, music, and his CD/DVD, “High Five Til It Hurts”