Fred Phelps believes that "God Hates Fags," because that is his Website and he's that guy who sends out people across the land to picket anything and everything and say that it's all happening because gay sex turns God's smile upside down and forces God to kill people. Perhaps you've seen them? They showed up in Brooklyn recently, but alas, they were not here to protest comedian Brent Sullivan's new one-man show, Fag Life: A Conversation with Fred Phelps. 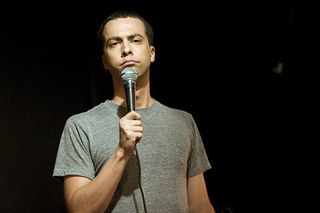 "Phelps' family came to Brooklyn for another reason, I think," Sullivan told me via email. "However, (directors Dave Hill and Eliot Glazer) and I are trying very hard to get them to protest the show as well. It's my dream, in fact. I don't think it's too far-fetched. He/his family protests ALL over the country, almost every weekend. I don't know where they get the money from."

Sullivan's show explores his own experiences with the gay community, through the rainbow prism that is the rambling rants of homophobe Phelps. Here is a Phelps video in which he accuses the entire University of Nebraska of being fags, now with added commentary from Sullivan:

Sullivan said his intent was to make a show about being gay that was straight-friendly, Phelps' approval notwithstanding. "I wanted to write a show about my experiences with the gay community without taking a stereotypical approach," he said. Which means being willing to poke fun at the gay community. "I think it's important that some of us begin to call out what's cliche, inappropriate and outdated in our community. I think this show does some of that."

He'll do that not only through some jokes he normally uses in his stand-up act about gay online dating or AIDS, but also through politics. "The entire show is framed with AMAZING quotes from Fred Phelps, who is the freak who started godhatesfags.com and tours the nation protesting the funerals of soldiers who died in Iraq because they died for a nation that supports homosexuality," Sullivan said. "His quotes are, of course, incredibly offensive but when taken a little out of context they become very funny. There's nothing I enjoy more than making something seemingly very offensive, very funny."