Two of those winners, in fact, were brought back from last weekend's ceremony to deliver additional acceptance speeches. But when those people are Tina Fey and Justin Timberlake, I suppose that's a nod to TV viewers? Fey and Timberlake had won the guest actress and actor awards in a comedy series for their turns on last season's Saturday Night Live. Timberlake pulled the predictable parody of Kanye West (twas ok), whereas Fey trumped him with this thanks to Michaels: "I wouldn't be here tonight if it wasn't for Lorne Michaels. Justin still would be very famous and very rich. But I would not be here. So thank you, Lorne Michaels." Timberlake followed up, saying: "You guys at SNL are the best. Thank you for letting me come and make a fool of myself as much as I am willing to do. So thank you for this. This was a huge surprise." Fey later got in a dig at her network's decision to put Jay Leno in primetime; while accepting another trophy for 30 Rock as repeat winner of best comedy series, she said NBC was kind enough to keep 30 Rock on even though it costs more to produce than a talk show. 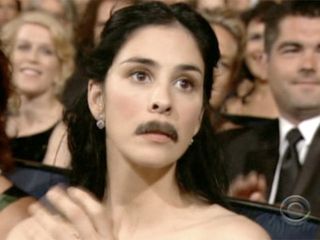 Fey did not repeat as best actress, however, as that honor went to Toni Collette for Showtime's The United States of Tara. Although Sarah Silverman stole that portion of the show with her deadpan use of a fake mustache.

Alec Baldwin, in his repeat win for best actor for 30 Rock, made a joke about wanting to trade his Emmy to look like presenter Rob Lowe, then decidated his trophy "Lorne Michaels, who is the greatest boss you could ever have, and who has believed in me for all these years, and I love you, Lorne."

In the supporting categories for comedy acting, wins went to Jon Cryer (Two and a Half Men) and Kristin Chenoweth (Pushing Daisies). Cryer got ribbed about his win during the broadcast by host Neil Patrick Harris, who also was nominated in the category. NPH, for his part, did a bang-up job as host, as multiple others (Jon Stewart among them) stopped to point out in their acceptance speeches. Not everything worked (we're looking at you, best seat in the house recurring bit). The opening number was bright and punchy. Here's the official video of it! 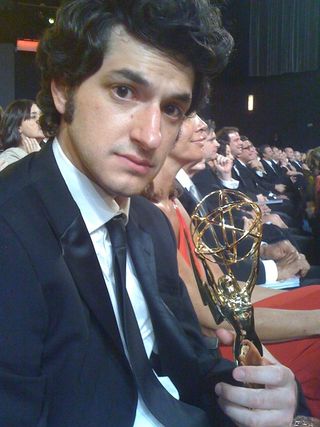 Was it a counterpoint to Hugh Jackman's opening musical ode to the Academy Awards? Regardless, the latter won an Emmy, which meant statues for Ben Schwartz (pictured here back at his seat by Parks and Recreation's Aubrey Plaza), along with Dan Harmon, Rob Schrab, John Kimbrough and William Ross (group photo TwitPic here).

It was fun not only to see comedians such as Schwartz, Wyatt Cenac, John Oliver, Judah Friedlander and Donald Glover onstage during various acceptances, but also to see that several comedians (and serious actors and actresses) were Tweeting from their seats at the Emmys. That includes John Hodgman, who was tapped by NPH and the Emmys to make announcing facts about the winners another area of his expertise. Perhaps the Tweeting might explain why he didn't announce facts for all of the winners? Hmmm.

What else? Jimmy Fallon auto-tuned a pratfall. Ricky Gervais delivered another moment of live, who knows what he'll say mini-drama comedy, in his turn as a presenter. And Jeffrey Blitz, brother of stand-up comedian and writer Andy Blitz, won for best director of a comedy series for his turn behind the camera of The Office.

Here is the list of comedy-related winners at the 2009 Primetime Emmys:

Two and a Half Men: Supporting Actor, comedy for Jon Cryer.

If you read this far, then you probably want to see Neil Patrick Harris and friends in their Emmy version of their Emmy-winning online video, Dr. Horrible's Sing-Along Blog. Roll the clip!

One thought on “Comedians win 2009 Emmys, live to Tweet about it”