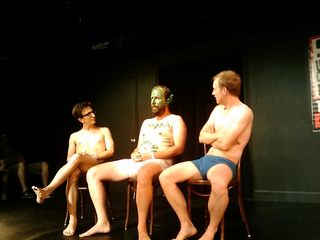 So we're a day into the 11th Del Close Marathon (aka on Twitter as #dcm11), and well, lots of highlights and crazy things to talk about already. I have been and will continue to share newsy tidbits throughout the weekend on my Twitter feed @thecomicscomic, but I also have my handy Flip cam with me, just for moments like this one, which happened shortly before 3 a.m. today — when Brett Gelman got into character as Star Wars Jedi master Yoda for "Yoda Hot Tub" to be interviewed by comedians Paul Rust and Neil Campbell in their underwears. (Photo courtesy of the official DCM11 Tumblr)

Even getting into character, it turns out, includes a lot of improvisation, as I learned watching Gelman at work. With cameos by comedian/actor Nick Kroll, Funny or Die's resident comedy expert Seth Morris, and Whitest Kids U Know's Sam Brown. This is a rough video montage. It could be cut tighter, I know, but did you know that Flip cameras also include a variety of music scores you could lay down underneath the "movie" and that the first one I tried sounded a little bit like the Star Wars Cantina theme?! Anyhow. Watch and learn, people. Watch and learn.