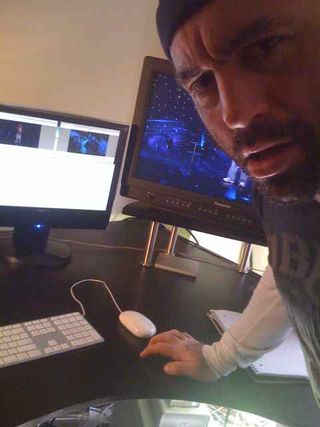 Joe Rogan is hard at work editing his upcoming stand-up comedy special, which will air on the Spike network in June. Rogan provides UFC commentary on Spike, so having his special air there (instead of, say, Showtime, HBO or Comedy Central) does make some demographic sense. In a post on his blog overnight, Rogan talked about how he hates having to watch and listen to his routines over and over during the editing process. There are surreal aspects to it, but also one very real fact that Rogan cannot control (at least until he gets a hold of the time-travel technology on Lost), and that's that he already has moved on from the material he performed for his special. As he explained:

"One of my problems is that a bit never feels completely done to me. I rarely say a bit the exact same way every time, and because I’m always tweaking them and fucking around with them they’re constantly getting better. My filming was just a couple weeks ago, and I’ve already got a bunch of new tag-lines for some jokes, and some better ways of setting up other ones. It really just never ends."

Any comedian's stand-up special is merely a snapshot of where and who he/she was as a performer that night. It can date your material in more ways than one. And yet, it's so hard to let go of a good bit, isn't it?

From webseries to Emmy: Childrens Hospital among 2012 winners of Creative Arts Emmys