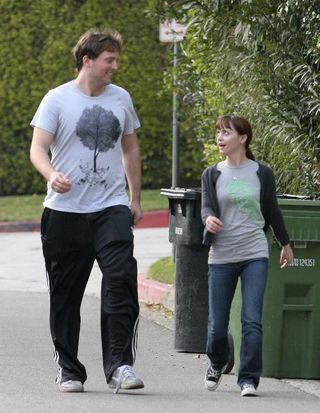 Society often tells us that women love a sense of humor in a man, and yet to hear many stand-up comedians onstage, all we ever hear about is how that's not exactly so in real-life. Rock stars, models, actors, directors, producers, even the key grip and just about anyone else with money beats out the comic, it would seem. And yet. Sometimes it is true: The comedian can get the girl! Christina Ricci's reps confirmed yesterday that she had gotten engaged to stand-up comic Owen Benjamin (who himself will be seen this week online in a new CBS online comedy, Heckle U). Congrats to them both!

As Owen Benjamin announced on Facebook overnight: Thanks for all the best wishes everyone. our goal is to one day have normal sized children. 6'7 plus 5'0 = normal kids. psyched

The couple met on the set of their upcoming romantic comedy, All's Faire in Love.

But Benjamin's not the only comedian to land a famous actress as a real-life love interest. Check out these other couples… 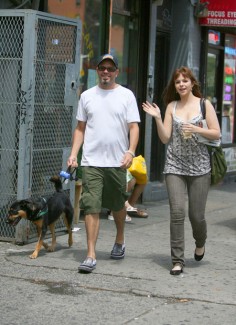 Amber Tamblyn famously talked to God in her TV drama Joan of Arcadia, and comedy nerds consider David Cross a God for Mr. Show, so just let them be, would you? I know there's quite an age difference working here.

They looked like quite the cute couple when I saw them interacting in public recently in Brooklyn. 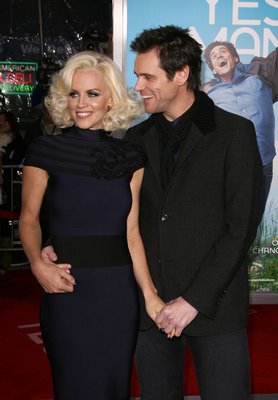 Yes, it has been a while since Jim Carrey performed stand-up, and calling Jenny McCarthy (no relation) an actress may be a stretch, but neither those definitions nor love knows no bounds.

And considering both have displayed a love of broad, physical comedy, and both were previously unlucky in love, it's just nice to see them truly happy to be together.

As long as they both remember to still be funny. 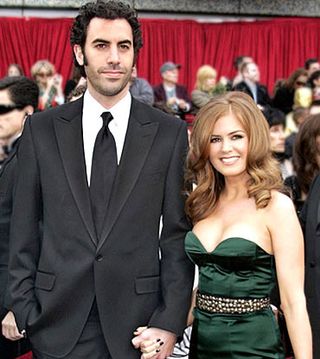 Sacha Baron Cohen achieved his worldwide popularity first with Da Ali G in Britain and later here in the states on HBO, plus, of course, Borat. But his girlfriend Isla Fisher made a big splash in Wedding Crashers, and after giving birth to the couple's first child, made her first starring role into a surprise hit this year with Confessions of a Shopaholic.

Would you be surprised if her movie made more money this year than his (he screened a few scenes from Bruno this week at SXSW)? Not me. 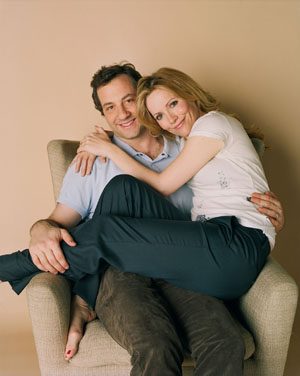 Judd Apatow, a stand-up comedian who has made much greater inroads into Hollywood in this decade as a writer/director/producer, met his future wife on the set of The Cable Guy.

And Apatow has not been afraid to cast his wife, Leslie Mann, as well as their children, in his big-screen productions (The 40-Year-Old Virgin, Knocked Up, Drillbit Taylor, Funny People). Is afraid the right word choice here? probably not.

Either way, that probably helps keep the peace on the homefront. 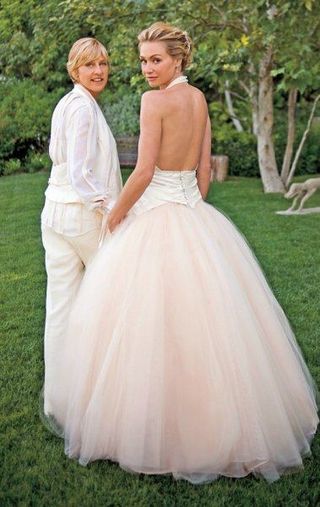 Even the girl can get the girl!

Yes, a plot twist in a blog post. Hooray.

Ellen DeGeneres certainly bounced back from the pop culture backlash when she first came out, as well as her first high-profile lesbian relationship.

Portia de Rossi, meanwhile, has shown her own comedy chops in Arrested Development, and stars in the new ABC sitcom Better Off Ted, which debuts tonight (March 18). 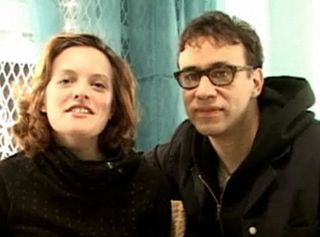 Elizabeth Moss has seen her star rise in the past couple of years, although her onscreen (Mad Men) and onstage (Speed-The-Plow) relationships with men have resulted in some massive duds. Thank you, Jeremy Piven.

Fred Armisen, a skilled musician as well as a skilled impersonator and sketch player on Saturday Night Live, should be able to fulfill any role Moss needs.

And they got to work together earlier this season when SNL did its Mad Men parody. Yay! The couple is engaged.

Honorable mentions: I considered but did not include these pairings…

“Happy Birthday to my Loose Acquaintance,” by Garfunkel and Oates

4 thoughts on “When leading ladies fall for stand-up comedians”