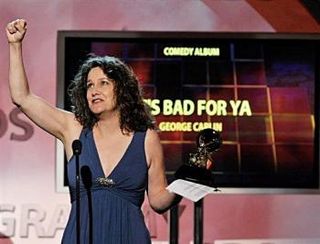 The late George Carlin won a posthumous Grammy Award tonight for Best Comedy Album his final recorded performance, "It's Bad For Ya." His daughter, Kelly, accepted the award on his behalf during today's pre-telecast portion of the 51st annual Grammy Awards. Reuters reported that she recalled that "in a chemically induced, altered state," he had dismantled an earlier Grammy (tonight marked his fifth win).

From the AFP, Kelly Carlin explained backstage: "This was back in 1972 when a lot of chemicals were being used by
human beings," she said. "He took it apart. And someone
from the academy found out so they sent him a new one." She called the Grammy "the cherry on the top of a great big beautiful cake…He's not here and I'd rather have him. But I'm just so happy people are honoring my dad." Carlin's performance was recorded in March 2008 for HBO. It's a fine tribute if you ask me, and I'm sure the other nominees in his category (Lewis Black, Flight of the Conchords, Kathy Griffin and Harry Shearer) would not complain too much at all about it.

The guys from Freestyle Love Supreme can add a Grammy to their Tonys for Best Musical Show Album for "In The Heights."

The trio of celebs reading Al Gore's "An Inconvenient Truth" beat out both Steve Martin and Stephen Colbert for Best Spoken Word Album. That feels like a snub of Martin, to me, because he wrote such a great, insightful memoir.

Also: They Might Be Giants have always used humor in their lyrics, and they won for Best Musical Album For Children for "Here Come the 123s." Weezer and the YouTube stars of 2008 earned a Grammy for the "Pork & Beans" music video. And part-time stand-up comedian, full-time Grammy winner John Mayer already has at least one win tonight before the broadcast portion begins at 8 p.m. Eastern (he had five nominations total). Congrats all around!

Comix’s “I’m With Coco” Haiti benefit may be sold out, but bidding remains open on few auction items

Behind the CCP: Nick Thune