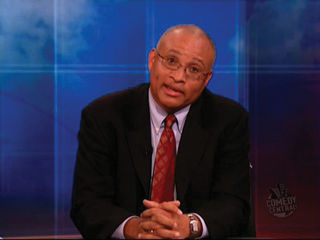 Though his comedy career spans over a quarter-century as an actor, writer and producer, and he's got a Peabody Award on his mantle (or wherever he keeps it), Larry Wilmore is recognized in the literal sense most by people for his recent work as a correspondent for The Daily Show with Jon Stewart. Perhaps Wilmore's new book, I'd Rather We Got Casinos (and Other Black Thoughts), will jog people's memories a bit. Or at least get them laughing. I had the chance to speak to him over the telephone this weekend, just before he headed out on his book tour.

You started out in stand-up comdedy and have been a writer and a performer. Do you have a preference? "I was writing out of necessity. I was a writer, but I never viewed myself as
a writer. It's funny. I actually prefer being viewed as a writer now. Because
as a writer, I get to complain about things. Writers like to complain."

You've explained already that the title of the book comes from a quote you delivered to Jon Stewart during a Daily Show segment. But what was the first "black thought" you had that inspired the rest of the thoughts in the book?

"How can a brother get paid during the writers strike? It
was really that pragmatic. I should probably do a book because there's going to
be a writers strike. And then I came up with the line…I'd rather we got
casinos," he said. "That's how I work a lot. I think of the title and it will
give me the impetus to write something. I used to write a lot of sketch. And
coming up with a good title would get you thinking and would really drive the
writing."

He first thought he'd play off of the presidential campaign of Barack Obama. "And then I thought I'd do a parody of hope," Wilmore said. But he would dismiss that. "It just
seemed too one note to me. I thought if I were reading that, I'd be bored by
the end of the first chapter."

"It's like writing a lot of different sketches. But I almost
called it 'Give us the Superdome.' But that was only after I started. I don't know what this book is, but it's a great effing
title."

Have you given any thought to a joint book tour with the guys from Stuff White People Like? (Their book tour ends Feb. 10, coincidentally) Wilmore asks me who they are, and I explain that like him, they came up with a title first, then a blog, then converted it into a book mocking things that, well, white people like.

Do you expect stand-up comedians to make different jokes about Black History Month now that Obama is president? "I don't know stand-up comedy as much, because I haven't been
in that scene. I have not been doing it for 15 years, really. It's hard to predict
what other people are going to do….it's hard for me to get in that role."

You present multiple views on black weathermen in your book. What's your stance on them today? "Someone gave me a magic/tragic quiz on MySpace. I write these
things and then I forget them. I have to go through the book and see, what did
I say? Today is a tragic day because it's raining in Southern California…but
tomorrow might be better…I have the emotions of a 5-year-old girl
when it comes to black weathermen."

Are you really serious about replacing the words African-American
and black with chocolate? "It's already been vetted many times before." He
talks about how the Rev. Jesse Jackson mentioned it in his infamous "Hymietown"
remark during his 1984 presidential campaign. "The full sentence is we're going
from Chocolate City
to Hymietown. He was talking about Harlem. But no one
considered the Chocolate City
part of it. They only cared about the hymietown part."

Of course, New Orleans Mayor Ray Nagin used the word "chocolate," too, to describe his city after Hurricane Katrina, and that was met more with confusion than outrage. "People were confused because they thought he was saying that was the name of the city," Wilmore said.

What's the story on your deal for an HBO sitcom? "I'm in deep development on that right now. I'm still toying with it. It's more like I have a project with HBO."

Most importantly, then, it seems to ask: Does it have a
title? "I had a title. It was a political show at first, based on Obama's
run, the authenticity of being black. And it was called 'Primarily Colored.'
But then I changed ideas. And I don't have a title although 'Primarily Colored'
would be a great title for any show. So once again I have a great title but no
show."

He has previous experience developing great sitcoms, winning a Peabody Award for creating The Bernie Mac Show. Wilmore said of getting Mac, who died in 2008, on board: "He wasn't sure if he wanted his name to be the actual name
of the show. I thought it should have that verisimilitude. Kind of the black
version of Seinfeld. Hyper version. I wrote a draft of the show and called him
and told him I made it Bernie Man. It was the worst dilution of Bernie Mac. He
hated it. So I got it changed. That was my subtle way of doing it."

How did you sell him on the idea of a family comedy? "That didn't take much. He saw that. He was very much a
family man…it was really the theme of it I was able to sell…The basic theme was
kids are terrorists, and I don't negotiate with terrorists. That was in every scene of the show, and that part he
really related to. He really liked being a dad…and he liked doing humor about
kids being really out of control. That feeling like he's really a prisoner. All
of those emotions I liked capturing on the show…That's all I cared about was how it made him feel…That's where that how 'talking to America' came about…he could whine to his best friend, America."

It seems as though just about every on-air personality associated with The Daily Show either has their own TV show now (Stephen Colbert, Steve Carell, Lewis Black, Rob Corddry, Demetri Martin) or is in development on one (Rob Riggle, Jason Jones, Samantha Bee). Can you shine any light on this? "It's just one of those things that attracts really bright people…so you know sometimes you get in those situations where you're really lucky, and it makes you stay on your game. I just always feel fortunate to be a part of it. Because it can be the opposite. Where you feel like you're
the only one who cares about something."

How would you compare the Daily Show environment to your experience as a writer for In Living Color? "It was very similar, that was one of my first gigs. To see Jim Carrey before he was really a star, that's something I'll never forget…Jennifer Lopez being a fly girl…I remember having coffee with Rosie Perez…I never thought Rosie would be nominated for an Oscar and that J.Lo would become the Elizabeth Taylor for her generation."

Do you have a favorite passage to read on your book tour? "I usually like to read 'In Search of Black Jesus.' I like 'Bring Back the Shetland Negro.' It's one of my personal favorites. It's kind of insider baseball about TV."

"It's guaranteed to offend enough people and make them laugh at the same time," he said of his book. "It's meant to be fun. Light reading, perfect for the
toilet. Not to put in the toilet, but to read in the bathroom."

So I take it you're on sabbatical from The Daily Show while on tour? "Kind of an
unfortunate one," Wilmore said. "I'm going to look at my schedule and see if I can force in a
date."

“Match Game” returns to daily TV, but only in [blank] Canada