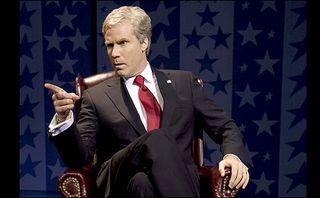 There is no doubt that "You're Welcome America. A Final Night With George W. Bush" is the hottest ticket on Broadway. Even in this economy, which already cut short several big Broadway productions. Or perhaps despite that, the cheapest balcony seats for this show go for $61.50 on Telecharge and up to $301.50 for the "premium" seats on Friday and Saturday nights. Good luck on TKTS! It began previews on Jan. 20, the day Bush formally handed over the presidency to Barack Obama — I cannot imagine why anyone would want to spend that night, of all nights, reliving the Bush years, but people certainly did, spending more than $837,000 on tickets in the first week. The production reportedly raked in $5 million in ticket sales before the first curtain dropped.

The show officially opened Thursday night. So how are the reviews? Mostly positive.

The New York Times weighed in with a laugh and a yawn, saying the production is equally funny and unsurprising, but no matter, for Ferrell "provides a
critic-proof demonstration of the art that has endeared him to millions
of fans around the world: the art of acting stupid, shrewdly, for fun
and profit." The New York Daily News gave it four out of five stars, saying that "getting to see this comic whiz in the flesh is a big treat," and that surely is a big factor in the show's popularity. Ferrell played W. live on TV for years on Saturday Night Live, but aside from a "Funny or Die" tour of college campuses, Ferrell's fans have had to settle for seeing him onscreen. Until now. Even though we think we know far too much about the previous president's foibles, the AP notes: "It's what Ferrell does with them that counts, taking off on wild riffs that produce giddy waves of laughter." Variety says "Ferrell provides a cathartic, almost cleansing farewell" to Bush. The Washington Post acknowledges the timing seems too soon to revisit, rehash and revise the Bush legacy, but adds: "Ferrell is better when reality begins to unravel." The Hollywood Reporter says no matter how you felt about Bush, the show will make you laugh.  USA Today's critic stands out among early reviews as one of the few who didn't enjoy this instant nostalgia ride into political absurdity, calling it a "witless, pointless spectacle." Ouch. One thing they all agree upon and seemed to love: Ferrell's improvised audience interaction portion of the 75-minute program, in which he bestows nicknames upon the fans who paid so much to see him live.

It's a limited run, with HBO presenting a live telecast on March 14, the night before the scheduled finale. I'll be interested to see not only how audiences react over the course of the following six weeks, but also how Ferrell's performances change during the engagement.

After the jump, Ferrell and Adam McKay, his co-writer and director, gave their own assessment of the show pre-previews to Time Out New York.