Highlights from the 2017 Funniest Person in Austin finals

The 32nd annual Funniest Person in Austin contest would, like any proper marriage, feature something old, something new, something borrowed and something blue. Or purple. Plus a round of Rum Runner shots on the house.

Cap City Comedy Club bustled and burst forth with mixed emotions on Tuesday night. Normally, the previous year’s winner of “Funniest Person in Austin” hosts and hands over the ceremonial robe and crown to the new winner. But the 2016 winner, LaShonda Lester, died in April just before she could reap further rewards such as a half-hour special she was set to tape last month for Comedy Central. Lester had joked and talked seriously about her battles with chronic kidney disease. Still, though, her death came all too soon.

Lester’s comedy BFF, Maggie Maye, had recently moved from Austin to Los Angeles, but returned to host the FPIA finals Tuesday in tribute to Lester. “Black girls rock!” Maye joked about wearing a red Detroit shirt (Lester was a proud Detroit native) and how she might just claim the 2017 FPIA for herself. Several past FPIA winners, including Martha Kelly (now a co-star on FX’s Baskets) sat in attendance for what some locals call Austin comedy’s “prom night.”

The end of the night’s festivities featured a tribute video to Lester, a round of Rum Runner shots for everyone in the audience, and then Maye officially retired the 32-year-old FPIA robe, handing it over to Lester’s widower, Dana. Cap City will host a fundraiser June 28, 2017, for her husband and child to help pay off the outstanding medical bills. Among the items in a silent auction: A trip package for Tosh.0. 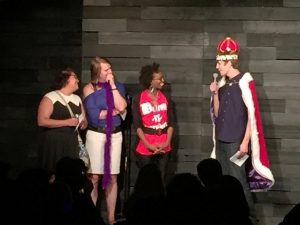 Nevertheless, the 2017 finals revealed just how much the Austin comedy scene continues to boom and nuture newcomers. A young guy and Austin native, Enzo Priesnitz, won, and he wasn’t the only finalist who looked like he or she could still pass for college-age because they could. Carina Magyar finished runner-up, while Vanessa Gonzalez took third.

Laughly livestreamed the final night of competitions, and I served as one of the judges (the only non-Texan, from what I could tell, too). FPIA hands out detailed scoring sheets to the judges, but at least in the finals, the scores come secondary to deliberation among the judges, sequestered after the competition as if we were a jury to hand down the verdict. Suffice it to say, my scores reflected a slightly different order of finish, including high marks for two comedians who ultimately didn’t place in the top three. I suggested next year’s FPIA finals actually use the scores. But I also can say honestly that with a rare exception or two, Austin’s final dozen contestants prove that the Texas capital city remains ripe with aspiring talent.

Earlier rounds handed out Joke of The Night prizes, so I also kept track of great jokes throughout the finals.

“I don’t know if I have to mention it at this point, but I am transgender. I’m not just hot in a weird way.” — Carina Magyar

“It’s a tiny crucifix,” Barbadoro said of her IUD. “It exorcises all the semen demons from your womb!”

“I’m a feminist. I’ve been offended by every single joke tonight.” — Barbadoro

“Of course one of those guys is gonna want to fuck me. I look great and I believe in myself.” — Devon Walker

“I haven’t read a book in six years. I spent more than two hours reading 173 guys’ attempts to fuck me.” — Enzo Priesnitz

“I’ve never been to a swingers party,” Priesnitz said. “But I don’t know that they need an extra guy.”

“Here I am, on a Friday night, teabagging my own face, trying to get rid of herpes.” — Delarios

“Nobody believes in God more than me. You can do it, God!” — Priest

“I want a girlfriend like a kid wants a pony. I don’t want to take care of it!” Priest said. “I just want to have sex with it.”

“It is May of 2017. Sixth Street looks like Trump has already been in office for the full eight years.” — Andrew Murphy

Vanessa Gonzalez’s killer set focused on how she tries to make her preschool students call her “mom” instead of their own mothers, and taking her first boyfriend to a water park.

Carina Magyar got the locals on her side by comparing Texas state legislators to locusts.

And Enzo Priesnitz won with a set that hinged on an experiment he played on Craiglist to see what it’s like to be a woman just looking for a date. 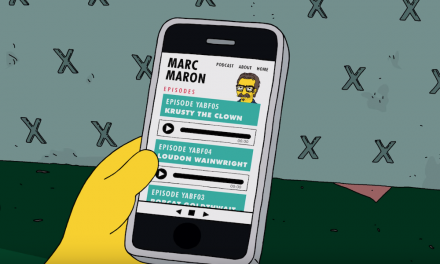 Marc Maron played himself interviewing Krusty The Clown on The Simpsons