Hot off a monthlong run of critically-acclaimed shows at the Edinburgh Fringe Festival, Chris Gethard will mount an Off-Broadway run for his one-man show, “Career Suicide,” presented by Judd Apatow.

In my review of “Career Suicide” last year at the UCB Theatre, I wrote that “as he has come to terms with his own mental health, Gethard acknowledges in his show how rare of a bird he is in speaking and writing about it,” and that his show will “brighten your day and his.”

Even if his show delves into depression, alcoholism, suicide, and mental illness.

As he tells his audiences: “I will not make jokes about anything I’m not comfortable with…We’re good. I’m seeing a shrink.”

You can listen to Gethard tell me some great inspirational stories from his life and career in episode #105 of my podcast, The Comic’s Comic Presents Last Things First.

Gethard, who stars in his own Fusion talk show and co-stars in the wonderful new movie, Don’t Think Twice, from Mike Birbiglia, will make his New York stage debut with “Career Suicide.” 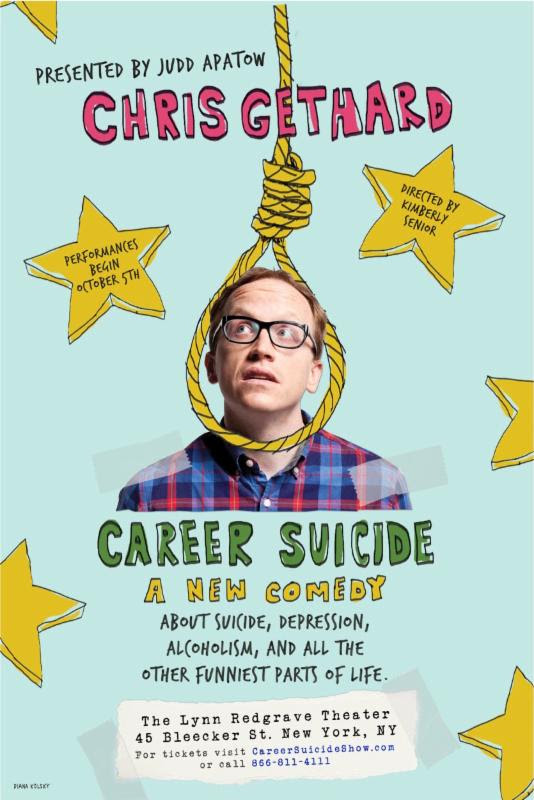 “People have expressed to me that making comedy about depression is insensitive. I vehemently disagree. We need to start laughing about this stuff, so maybe we can finally be comfortable talking about it afterwards,” Gethard said in today’s announcement about going Off-Broadway. “I just try to make sure my jokes come from an honest place, and unfortunately for me being honest means copping to the fact that I once crashed a car on purpose.”

“Sometimes comedy allows us to deal with stuff that we aren’t quite ready to deal with. And depression is something that people still don’t like to talk about it,” Apatow added. “Luckily, Chris Gethard is a hilarious storyteller and is willing to talk about all of it, to what can only be referred to as an ill advised degree.”

Kimberly Senior (Disgraced on Broadway, The Who And The What) directs with scenic design by Brendan Boston (The Iceman Cometh), lighting design by Jen Schriever (Eclipsed on Broadway) and Trevor Dewey (The Coast of Utopia: Voyage), and sound design by Ryan Rumery (Fool For Love on Broadway).

Tickets for Chris Gethard: Career Suicide range from $45 (previews) and $55 (after October 13th) with premium seating available. Chris Gethard: Career Suicide plays at The Lynn Redgrave Theater (45 Bleecker Street at the corner of Lafayette Street) Tuesday – Sunday at 7:30 pm, with matinees Saturday and Sunday at 4:30 pm. Tickets can be purchased by visiting www.CareerSuicideShow.com or calling OvationTix at 866-811-4111.