Hyper reality: The Comedy Vérité of “The Jim Gaffigan Show” on TV Land 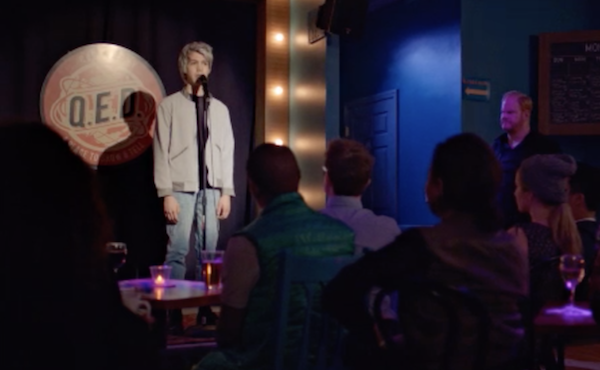 Fans of Seinfeld love to visit the iconic places and people featured on the hit NBC sitcom, from the diner where Jerry hung out with George, Elaine and Kramer, to the Soup Nazi, and everywhere Upper West Side in between. Except Seinfeld hardly ever shot in New York City. Most of its New York street scenes took place on a studio lot in Los Angeles.

More recently, FX’s Louie enjoyed shooting some stand-up comedy scenes at The Comedy Cellar and Caroline’s, among other places, and even opened its early seasons by showing Louis CK’s walk from the West 4th Street subway station to the Cellar.

But in the wave of semi-autobiographical sitcoms about stand-up comedians that have followed, The Jim Gaffigan Show stands out from all the rest — precisely because of how realistic the TV Land series portrays the land and the comedy scene it inhabits.

If the dirty secret of “reality” TV is how much of it has been scripted by writers beforehand, and shaped by producers and editors in post-production, then the happy revelation of The Jim Gaffigan Show is how much the series over the course of two seasons has played out as a documentary of what it’s like to be a New York comedian today, as seen through the eyes of the Gaffigans. Even if actors portray the comedian’s wife and children onscreen.

I mentioned it before, but here’s a recap of the comedians who appeared just in season one of The Jim Gaffigan Show, either as themselves or in character.

Season Two opens with the continuing cameo appearances of Macauley Culkin, but also a cameo by Cardinal Timothy Dolan (the Gaffigans joked about it afterward on SiriusXM with Dolan), and Jerry Seinfeld as Gaffigan’s comedic spiritual guide.

Even a dream-like nightmare scenario episode, such as Episode Two of this second season, “The Trial,” is based on a true story — and not just because it opens with the words “Based on a True Story.” It imagines a mock trial of Gaffigan in court over a very real Tweet he posted back in 2013, and which Gawker raked him back over the coals for. To wit: Jim Gaffigan Made a Crack About Women’s Nails and Everybody Freaked. That episode also includes Carrot Top, Artie Lange and Gilbert Gottfried as fellow inmates of Gaffigan in social media jail, along with the band Nickelback. It’s all very carefully thought out.

This week’s episode, “Ugly,” featured Gaffigan auditioning for a movie role opposite Alec Baldwin, with a cameo also by John Mulaney.

And this coming Sunday’s episode has Gaffigan visiting Union Hall in Park Slope and Q.E.D. in Astoria in an attempt to get back into a comedy blogger’s good graces after getting snubbed on a funniest-comedians-in-NYC list in “The List.” That’s in addition to stops at The Comic Strip, Stand-Up NY, and multiple appearances across both seasons at places such as Gotham Comedy Club and Katz’s Deli. 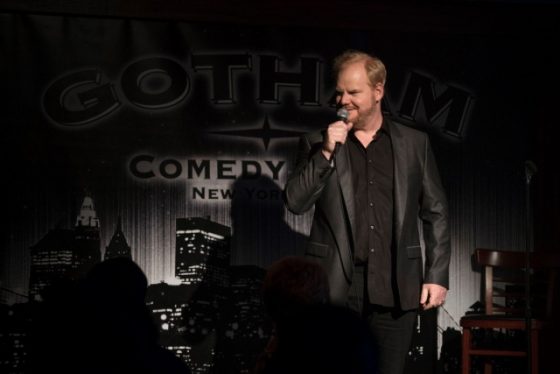 It’s all by design, as Jim and Jeannie Gaffigan — who write the episodes of their TV Land series together — told me on Sunday night, at Q.E.D. Christian Finnegan, whose wife Kambri Crews owns and operates Q.E.D., not only serves as a consultant on The Gaffigan Show, but also in this episode is begged by Gaffigan to try to help him secure a spot on a Q.E.D. show.

Jeannie added: “There was a lot of talk the first season, and even for the pilot, that while this location is going to be too hard to get to, why don’t we just call this other location that location? And Jim’s like, ‘I’m never going to do that. I can’t call Jerry’s deli Katz’s…if it’s Katz’s, it’s Katz’s. We have to be at Katz’s.’ Because just for the people who will know, it’s just going to take them out of it.”

Jim: “It’s not like I eat pastrami every day. No. I could! But some of that is, it’s a big place. So, I mean, look. I love Crif Dogs, I love it, but you can’t get more than one camera in there. And I love Mamoun’s, but you can’t sit down in there. And so, there’s different places – but even the geography of getting to and from a place, I’ve argued with people. The DP will be like, ‘It’s prettier this way,’ and I’m like, ‘Yeah, but that’s not how I walk home.’”

“Which sounds insane. But as someone who’s a New Yorker and watches shows, it just takes me out of it. You’re like, wait a minute. C’mon! That’s, that’s obviously Toronto.” 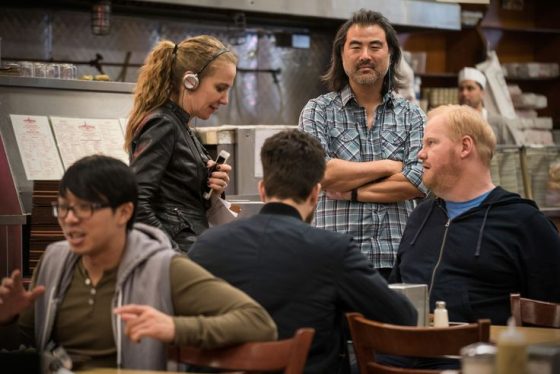 And Katz’s really is a popular stop for Jim.

Jeannie revealed: “By the time we had our fourth kid, I found out that each kid had their picture up on the wall at Katz’s.”

“We try to really use as many people as we can that are real comedians,” Jeannie said. “But we have, sometimes the first person we’ll think of for a role, like in season one, we really wanted Janeane Garofalo to play this school teacher in the East Village. The kind of crunchy school teacher, because we just thought she was so good. But then, later, we were like, now we can’t use Janeane as herself. So we do have some comedians who are playing characters, and then we have to lock them into that character. Because we can’t say, ‘Oh, hey Janeane! It’s cool that you’re here. Your twin sister teaches my kids. You know what I mean?”

“It’s more likely you’re going to see a stand-up comedian playing a character, than an actor playing a stand-up comedian. Because our life is like that. Jim’s office is the comedy club. So when he goes to the office, the real people who are there just adds so much value to being at a comedy club with real comedians. Every once in a while, you’ll see a little bit of their stand-up onstage. When the MC calls him on, you’ll see that coming up in this season, and then also, he’ll run into people in the hallway before he’s going to go on, and have an interaction with them. And they’re always real comedians.”

With one big exception.

Jim: “We take great pride in using comedians, but the other comedian on our show is played by Adam Goldberg. And I really wanted that to be a comedian. But the great irony is that it worked out better that we have Dave be played by an actor, because if that was Todd Barry or Dave Attell, then, as much of a degenerate as Dave Marks is – as played by Adam Goldberg – I think Dave Attell would be like, ‘Well, hold on a second. I didn’t build this career I have to play this guy who’s dating only 18-year-old girls.’ Whereas Adam’s playing a character.”

Jeannie: “Our interview with Adam was on Skype. He was shooting Fargo at the time. And I think he was a favorite of some people that were saying, ‘You gotta see this guy for this part.’ And we were speaking to him, and I got goose bumps because he has – Adam himself has the soul of a comedian. Being around a lot of comedians a long time, there’s a certain thing that comedians have. It’s some kind of like weird pain, or, but it’s joy. It was so crazy to see it.”

“He’s a little bit tortured, in a way. But he’s super funny. He really reminded me of Greg Giraldo, who was an incredible comedian and a wonderful friend to us. And it gave me goose bumps just seeing how much like Giraldo he was. He even had the same bracelet.”

Jim: “Greg Giraldo and Adam are very different people, but there is a sense that’s similar.”

Added Jeannie: “This guy has got to play Dave.”

The Jim Gaffigan Show airs new episodes Sundays on TV Land, with repeats throughout the week on that station, plus Thursday nights on Comedy Central. 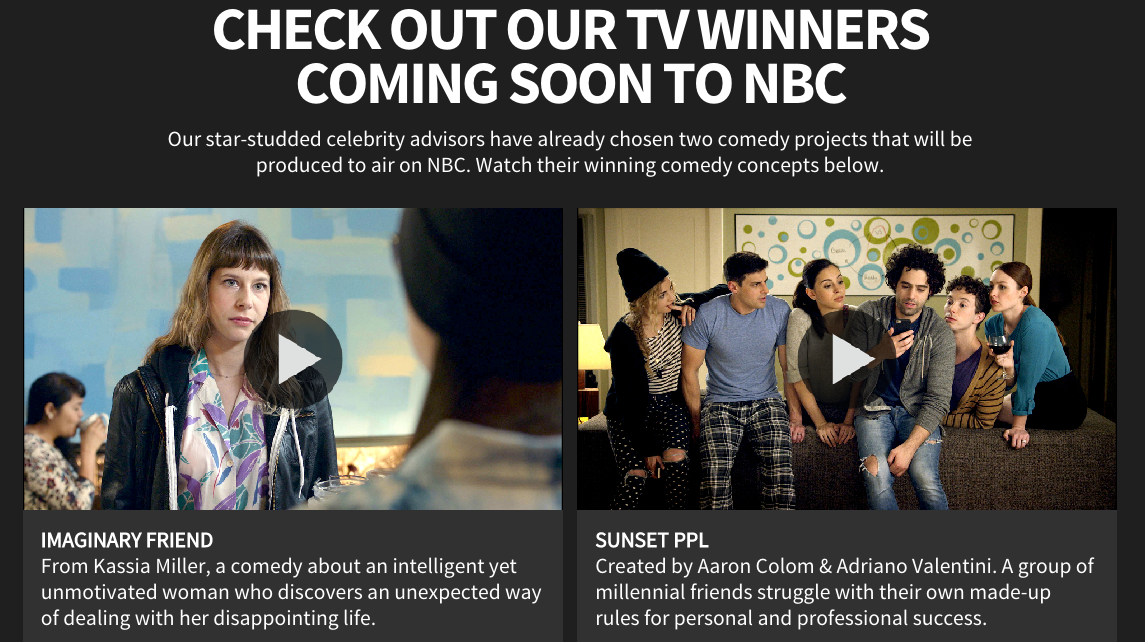