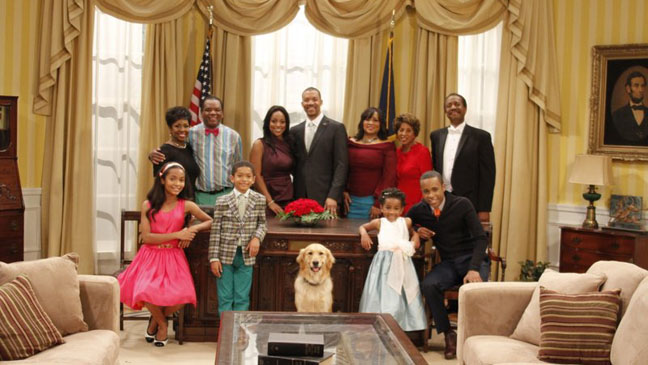 Byron Allen certainly likes doing show business on his own terms, and his production company’s first sitcom is no different.

After shooting a pilot for First Family at his own studios in Southern California, Allen went ahead and ordered 104 episodes — despite not having a network or syndication buyer for the series yet. The comedy — which follows an African-American family that occupies the White House but is not meant to be the Obamas specifically or satirically — does reunite 227‘s Marla Gibbs and Jackee Harry, though. The cast also includes John Witherspoon as the president’s father, comedian Paul Rodriguez, and yes, Gladys Knight.

Allen said in announcing the series: “There’s a huge shortfall of quality family sitcoms, and we are 110 percent committed to filling that enormous void. Our number-one priority is to deliver the highest quality content in the sitcom genre, and this initial 104-episode order is a big step in the right direction.”

He’s also ordered production to begin on 104 episodes of a second syndicated sitcom, Mr. Box Office, about a big movie star sentenced to community service teaching English at the toughest high-school in America. Not exactly Teach: Tony Danza. But you get the idea.

Allen expects to sell the series to stations in time for the fall 2012 season.

Jerry Seinfeld at the Comedy Cellar

Would you like to buy something Lenny Bruce owned? Bidding opens on comedian’s memorabilia