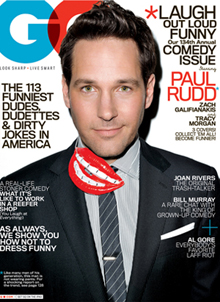 Take a look in case you forgot.

Well, not really different, considering GQ is a men’s magazine, and anytime they put a woman on the cover, she’s treated as a sexual object of desire. Scroll through the past covers of GQ in case you need a reminder.

That’s not a knock on GQ, per se. If fancy men want to fancy themselves a look at beautiful women looking beautiful, then sure, why not, definitely, most definitely. But it perpetuates a thinking in the minds of dumb men (and women lacking self-worth) that funny women are sexy first, and funny second.

If you can get past the sexy photos of Mila Kunis and read what she says in her GQ interview, then you’ll find out that she looks up to Lucille Ball. Here’s an excerpt:

Mila Kunis: Lucille Ball is perfection‚Äîher timing and her commitment. Sarah Silverman is raunchy and brilliant, and people call her out for saying fucked-up stuff  that they wouldn’t have a problem with a man saying. How dare she? Who else? Tina Fey. She’s a genius. I actually just finished reading Bossypants.

GQ: That was good, I thought.

Mila Kunis: No! Not good, brilliant. I love Tina Fey. So funny, but never shticky. She’s not tripping over shit.

GQ: She’s so clearly attractive and successful that I can’t buy her self-deprecating stuff anymore.

Mila Kunis: I see your point. You want the attention to go to the joke itself rather than be distracted by who’s delivering it. But look at Bridesmaids. That movie’s full of beautiful women who are hysterical. I’m so proud of those ladies. You have no idea how hard it is for a woman in this business. A lot of people don’t even think women are funny. It’s fucked-up, but you have to deal with guys like that. I’ve learned to roll with it.

Of course, even the magazine’s writer prefers to focus on Fey’s “clearly attractive” looks, which Kunis then defends.

GQ: Do you have a personal experience of men in Hollywood not finding women funny?

Mila Kunis: I don’t personally know of anybody, no. I could give you some bullshit excuse why I don’t, but I just don’t. The bottom line is if you’re an attractive female in this industry, people just take you as that: attractive. People aren’t getting the opportunity to move beyond being attractive. It’s not only with comedy. It could be with drama or action or whatever. People are distracted by looks. It happens. I’m not saying it happened to me, but it happens.

I just wish we could be treated to articles, photos and videos of funny sexy women that focus on their senses of humor rather than on our senses of sight.

Will Ferrell on Broadway, the video tease

One thought on “Women are funny, but GQ really just wants you to think about them sexually in its 2011 Comedy Issue”