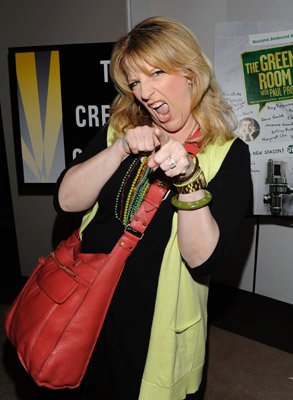 Looks like Lisa Lampanelli lately is steering her career in a new direction. Make that directions. Word has surfaced in the past week that Lampanelli has written a one-woman show for herself that she hopes to take to Broadway, and she also has sold a reality show pitch to Logo TV that would follow Lampanelli and her newlywed husband as they build a life and career together.

Lampanelli told New York Magazine about her one-woman show, which she is working on with help from Alan Zweibel:

"It's something that I haven't done yet. I'm scared to death because I have to talk about the real stuff. Like, no stand-up; there's not one line of stand-up … it's pretty much going to focus on my two main obsessions in life, which are men and food. And now that I'm married I only have one obsession, food, so I'm going to stick to that."

And from Deadline, which reported on Logo TV's latest development slate, comes word of Big Loud Lisa, which is being executive produced by Chelsea Handler's Borderline Amazing Productions, Parallel and Lampanelli.

Kids in the Hall: Their Vegas debut!

The messy 2010 Streamy Awards, and what they say about how we watch the WWW now