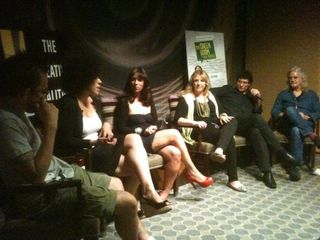 After a special sneak screening of the first two episodes of The Green Room with Paul Provenza, which returns to Showtime for its second season on July 14, 2011, Provenza convened a special live panel last night for The Creative Coalition with comedians Billy Connolly, Lisa Lampanelli, Rain Pryor and Jamie Kilstein inside The Core Club in Midtown Manhattan.

One of the first topics thrown at the panel was dealing with hecklers, and Lampanelli told the story of how one of her very first shows as an MC included a heckler who prompted her to change her entire act and become the insult comedian that made her a star and the self-described "Queen of Mean."

Lampanelli told the audience she was working a gig with her first husband:

"So I went up and I was emceeing, and everybody knows that the MC goes up and does five minutes, and then they bring up the next act. So I do my five minutes, and I did OK for like my fifth time onstage, and my poor husband, with his retarded jokes and horrible one-liners — we were divorced, by the way, before he died, so it's OK, I felt really bad when he died, I'll mourn later. As I'm watching poor Jim struggle, I hear somebody yell, 'Bring back the fat chick!' So it's kind of a compliment! But it's like, oh my God, I'm fucking fat! They noticed I was fat. I thought I was hiding it, under layers. So I go, well, I took it so to heart, I was so upset, that the next day, I wrote all insults. I said, 'I was going to get those cocksuckers before they get me,' and I'm an insult comic now. So thank you guy who said, 'Bring back the fat chick.'"

Provenza: "Is that the truth?"

Lampanelli: "That's the absolute truth. Yeah, I was like, I am not letting them get a word in."

Lampanelli: "But that shit will fucking kill ya! Because you know what? It's these fucking Twitters. These Twitters! Oh, 'You're hilarious for a fat cunt.' When did I become the fat cunt now! 'Cause, what happened to Roseanne? What happened to all the other old fat bitches? Kirstie Alley, Carnie Wilson, or Rosie O'Donnell? C'mon. I at least wear makeup."

After laughs die down, Provenza continues: "You're the iconic fat cunt."

Lampanelli replies sarcastically, "Yeah, I'm so happy. I'm really thrilled about it," then adds: "But it is weird how these Twitters will really ruin your day if you let it. You know? Because that's a heckle, basically. Twittering and Facebook is heckling."

Provenza: "It's an offense mechanism."

Lampanelli: "Yeah, I get them first."

How do you end a late-night TV monologue? Zinger, smile, spin, cue the band: “The George Lopez Game”

One thought on “Lisa Lampanelli on the heckler who turned her into an insult comic, the “Queen of Mean””