Mere weeks after saying goodbye to both of its new sports-themed comedy series, Comedy Central has ordered series pickups for two sketch-comedy ideas: One starring Nick Kroll and all of his characters, The Nick Show Kroll; and the other, an untitled project reuniting MADtv alums Jordan Peele and Keegan-Michael Key.

Interestingly enough, the press release from Comedy Central seems to indicate that Kent Alterman ordered both pilots to series without even seeing them. In fact, his quote says just that!

“I haven’t seen either pilot yet, but I think so highly of the talent involved, I can’t imagine the shows won’t be great,” said Alterman.

Nick Kroll proudly announced his show to friends, fans and followers on Twitter… 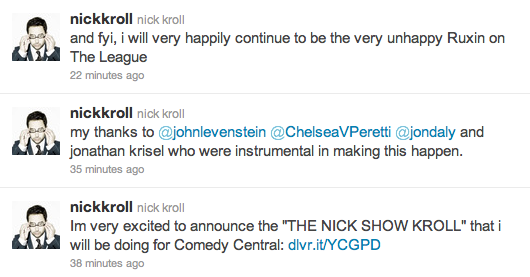 And yes, all of Kroll’s characters that you’ve come to know and love will be a part of the series, including Bobby Bottleservice, Fabrice Fabrice and even the “Rich Dicks” sketch that Kroll and Jon Daly did for Funny or Die. Related: Watch The Ed Hardy Boyz and Rich Dicks videos now!

As a bonus, the pilot also features a sketch with Jenny Slate called “The PubLIZity Girls.”

Executive producing and writing with Kroll on The Nick Show Kroll are John Levenstein (“Arrested Development”) and Jonathan Krisel (“SNL,” “Portlandia”), who also is directing. As Kroll thanks above, Daly and Chelsea Peretti also have their handiwork on this series.

The other pickup features Keegan-Michael Key and Jordan Peele in their own two-man sketch show, as of yet untitled, with them bantering in front of a live studio audience between filmed bits. The pilot, which Peele said they were in post-production on back in April — he was calling it “Key and Peele” then — included scenes in which Lil’ Wayne raps in jail while getting stabbed (spoiler alert!), Peele’s impersonation of President Barack Obama (Peele auditioned for SNL before Lorne Michaels picked Fred Armisen to do it in 2008), and a reality cooking competition spoof.

Joining Key and Peele as executive producers on the series are Ian Roberts and Jay Martel.

No word on the production or broadcast schedules for either new sketch series. But congrats to all involved!

Kristen Wiig will star in a sitcom for Apple TV

“Lights Out with David Spade” premieres July 29, 2019, on Comedy Central