After putting on the first “Big Time Comedy Show” in NYC in February for the family of the late Greg Giraldo, comedians have organized a second all-star comedy affair to take place on June 29 at the Wiltern in Hollywood. 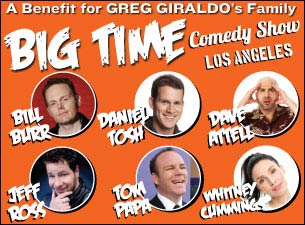 As you can see, host Tom Papa has assembled some big names to pay tribute to Giraldo and help raise money for his three children as well as for The Greg Giraldo Fund.

Dave Attell, Bill Burr, Whitney Cummings, Jeffrey Ross and Daniel Tosh all are on the bill for the June 29 tribute.

Tickets are available from $34 to $80 via Live Nation.

The Comic’s Comic expands? The Laugh Track, Comedy.com and you