You may have seen Jim Tavare on the sitcom Wings many moons ago, on NBC’s Last Comic Standing more recently than that, or even in a comedy club near you. He’s difficult to forget. Bald guy. In black tie. Playing the cello.

So what happens when another British guy does essentially the same shtick? Jim Tavare has been on a Twitter tear today wondering what to make of Sid Bowfin. So far, he’s been telling friends and colleagues that Bowfin has “cloned my stage image, premise behind my act, website.” 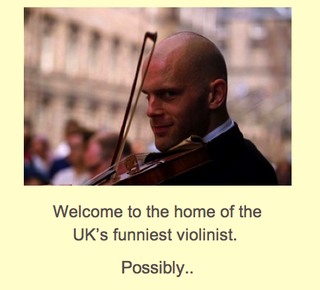 This is Tavare’s landing page online. And this is Bowfin’s. Certainly identical fonts and layouts going on there.

And Tavare notes that many of Bowfin’s photos show him sporting a full head of hair until recently adopting the same bald look.

What about what they look like onstage with a microphone malfunction?

Is there room in the comedy world for more than one bald man in black tie to play the strings for laughs?

I’ll let you watch these videos and then let your fight-or-flight instincts kick in, appropriately…

Andy Kindler’s State of the Industry 2010: Would you believe even less focused, Just For Laughs?

5 thoughts on “What makes a comedy act unique? Jim Tavare wants Sid Bowfin to explain himself”