Chris Wallace invited Jon Stewart to his Sunday-morning talk show, FOX News Sunday, with aims to prove that The Daily Show host not only has political intentions himself but also has a specific political point of view. 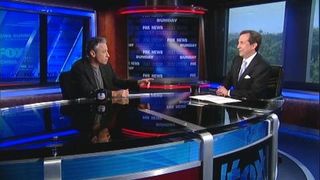 Only Stewart wouldn’t buy into Wallace’s agenda, telling him: “I’m a comedian, and my comedy is informed by ideology. But I’m not an ideologue.”

Wallace hoped time and again that Stewart would say that the “mainstream media” has an inherent liberal bias, and that Stewart buys into that. But the comedian replied consistently that his view instead is that too many media outlets are merely lazy and go for the easy stories, the sensational stories and the stories that provide clear conflicts to push the viewers buttons. Stewart pointed to Nancy Pelosi’s recent press conference, which the 24-hour news networks all cut away from as soon as Pelosi talked about jobs instead of Congressman Anthony Weiner. “What’s your evidence of the partisan bias, again, and what I do?” Stewart said. “That’s the embarrassment. The embarrassment is that I’m given credibility in this world because of the disappointment that the public has in what the news media does.”

Then he told Wallace that FOX News viewers are the most misinformed. Which Wallace responded to by pulling a clip from the Comedy Central Roast of Pamela Anderson. Case closed?

Here’s the full, unedited interview (not all of this made it to air on Sunday).

One thought on “Jon Stewart tells Chris Wallace on FOX News Sunday: “I’m a comedian…I’m not an ideologue.””