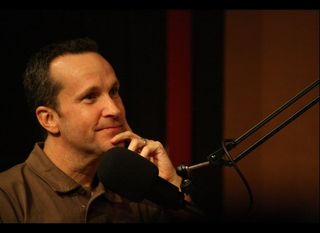 Jimmy Pardo is bringing his Pardcast crew, aka Never Not Funny, to New York City for a live taping Saturday at the Gramercy Theatre with special guests.

But before that, Pardo took some time to talk to The Comic's Comic about his ninth season of Never Not Funny (which just debuted last week — this week's episode of NNF features guest Al Madrigal), podcasting, and becoming a more visible presence on Conan, the show he has been warming up audiences for since O'Brien and company moved to the West Coast.

You usually record Never Not Funny in a studio with just Matt Belknap, Pat Francis and your guest. I know you go live and public each year for your Pardcast-A-Thon for charity (related reading on Pardcast-A-Thon from 2009), but only sometimes go on the road in front of live audiences. How does the live audience impact the feel and flow of the podcast?

"We've done them. We hit some festivals. We did the San Francisco (SF Sketchfest) the past three years. We did Vancouver. We did Bumbershoot. We're doing New York City … and then we're doing Denver in July. We've done maybe six in the past six months. It's neat to do. It's neat to do a live version of the show, and meet the fans. It's more about them coming out and geting to see us. We've been in their ears for the past five years. I know Doug Benson and Marc Maron have done a lot of live shows. But we're a team. Three people. So it's more cost prohibitive. But it's also an event."

How do you change the show for the live audiences, though? "Obviously when you've got a full room of an audience who are fans of the show, you can do a lot of inside jokes. I do this dumb Cajun Jimmy character. Whenever he shows up, the place goes bananas. They've gotten progressively easier to do, with a bigger fanbase."

You're also getting more fans to see you on TV, too, as you've recently become a more visible part of Team Coco — not only warming up audiences, as you've done for the past couple of years, but also onscreen yourself, with bits such as the sidekick's sidekick to Andy Richter. I'm obviously partial to that sort of thing. Your idea or theirs?

"I think I was lucky, because they were always looking for something more for me to do. There were other ideas that were kicked around. I shot a couple of sketches that didn't air. But sidekick's sidekick was so successful that we did three that week. And Conan said, 'See. It was good that we waited.' He's a very smart man."

There are so many more comedy podcasts now than since you got into the game five years ago. Do you pay attention to all of the others, or do you just chart your own course and not worry about the competition?

"Wee're in a unique position in that we charge money for our podcast, so we've been an island onto ourselves. But we've always been a unique thing from the beginning."

"And now with the deluge of podcasts, I listen to some of them. I don't have the time. But there are some great ones out there…everybody for the most part is doing something different. Maron is doing a Charlie Rose-type interview one-on-one with comedians and actors. Doug does movies and the Leonard Maltin game. And Scott (Aukerman) has characters. My goal from day one was to entertain, hopefully make people laugh. I was never one for stunt booking. I always wanted to book the guys I thought were funny as guests. But I've been lucky recently to meet people that I didn't know as guests, like Ty Burrell…you get that extra panache. I've never really gone for, 'I have to book the most famous guy.' I see that these other shows — Maron gets big names, Chris Hardwick gets big names. I don't consistently do that. I just try to book funny people."

And I imagine you're quite happy that you decided to go to your free/pay hybrid model when you did, before the comedy podcast boom? (You can listen to the first half-hour or so of each NNF episode for free, but to hear the entire 90-minute episodes, it costs $19.99 for a season pass, or $24.99 for a season pass plus video footage)

Do you have any advice for those comedians still thinking about launching a podcast? "My stock answer is just to have a point of view. I was one of the first ones to be just three white guys sitting around talking. I think a lot of young podcasters, think, 'Oh, we just sit around and talk. But there's enough of that. There's enough of three white guys sitting around talking. Why would you want to do the same thing that Jimmy Pardo is doing or Chris Hardwick is doing?"

That point of view advice also works just for stand-up, too. "I'm a great example of that. When I was first doing open mics, I was really funny, I took a lot of risks. I'd be funny. I'd bomb. But then when I started getting paid, I became really generic. It took me a while to spin out of that. I literally put myself behind an eight-ball for two years before I got out from behind that. By the way my voice got really agreessive. I don't know who I was attacking there for a moment."

Perhaps you were just in your Pardo Patrol mode?

How is the Pardo Patrol coming along, anyhow? I see you're getting to do some fun backstage stuff for Team Coco with folks like Dana Carvey.

"I think we initially were going to do one a week, and then we did two the first week, so that blew that out of the water. Not everybody wants to stick around an extra 10 minutes to play horse-ass games with me. They have to be fun."

Art, commerce and somewhere in between lies The Characters of Kate Berlant on Netflix

On Second Thought with Costaki Economopoulos