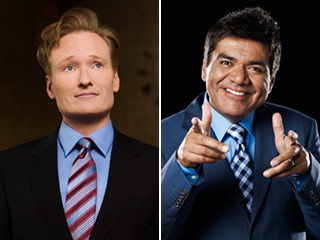 Logistically, it's an easy cross-promotion to pull off, as they not only work for the same network but also work on the same Warner Bros. lot in Burbank, Calif. It's a walking commute. And as O'Brien told Lopez, that walk on the lot sometimes make him feel uncomfortable, as tours stop to point him out and expect him to offer an extra dose of entertainment. Earlier, on his show, O'Brien also teased Lopez for his behavior in the front row of NBA playoff games.

But more than that. If anything, the cross-promotion really served to remind everyone that Lopez has a beef with Erik Estrada. Can it be healed? Do we need it to be healed?

“The Simpsons” writers and Conan O’Brien reminisce in 2013

Lewis Black organizes a comedy cruise with his funny friends