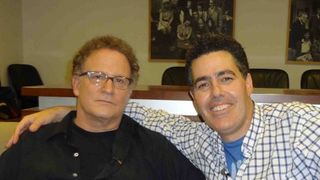 You may have heard that Adam Carolla surpassed Ricky Gervais for the Guinness World Record of most podcasts downloaded. Well, that in itself is a triumph of quantity as it is quality, although you need a quality amount of fans to keep on downloading to become that popular.

Which is what you'll get if you download this 89-minute chat between Carolla and Albert Brooks. Carolla not only channels a WTF with Marc Maron vibe — what with the dispensing of his usual show for a pre-recorded intro, and a drive to visit Brooks where he lives for an uninterrupted one-on-one discussion — but also gets Brooks to open up about his career arc, about his (and Carolla's) pet peeves with modern movies, and about their siblings. As you probably hopefully know, one of Albert's brothers goes by "Super Dave Osborne."

You can tell it happened very recently, as they reference the IMF chief's rape scandal, Ahnold's love affair with his housekeeper, and Adam's appearance on Kimmel.

It's an insightful chat. A few profanities get thrown about. So think about that before you find yourself learning it's Not Safe For Work.