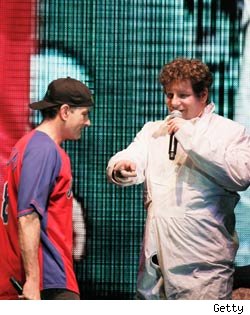 When Charlie Sheen's live theater tour turned out to be not quite so well-thought-out, they called in comedian Jeffrey Ross, aka The Roastmaster, to roast Sheen onstage.

After the first night, Ross sent me this message about it via Twitter: "Im gonna follow CS around the country & roast him as a public service 4 those who bought tickets to his trainwreck of a tour."

Today, Ross told The Hollywood Reporter quite a bit more about the experience. He hadn't met Sheen beforehand. His one rule for Sheen before agreeing to join the tour? ‚ÄúIf Charlie calls me himself and says it's OK to roast him, and if he can go through that gauntlet, then it will be great.‚Äù And when Sheen said OK, and the tour happened to be heading to Atlantic City, it was game on.

So, about that first show together:

I let him sweat it out for a good 30 minutes, then he started getting a little choppy and someone yelled out, ‚ÄúI want a refund!‚Äù We didn‚Äôt have a cue or anything. I walked out in a hazmat suit, pulled the mask down, and said, ‚ÄúCharlie, these people paid for a show, they deserve a show ‚Ä¶ it's a comedy intervention.‚Äù Because that‚Äôs what was driving me crazy: He was billing it as a comedy tour without being a comedian. You can see why comedians were not supporting it; they were insulted. And it's tough to insult a comic.

So I just laid into him — the meanest things I could think of on a day's notice: ‚ÄúYou call yourself a Warlock from Mars ‚Äî maybe you are, but you're not a comedian from Earth;‚Äù "If you're winning, then this must not be a child custody hearing;‚Äù And my favorite: ‚ÄúCharlie Sheen is to stand-up what Larry Flynt is to standing up.‚Äù At the end, he hugged me and asked me to do the next show at Foxwoods. Since I already had the weekend off, I was on the East Coast, I figured I'd do both shows and then be halfway to New Jersey to see the family on Passover. It was the oddest mix of happy accidents imaginable.

Their tour together continues tonight in Vancouver, B.C.