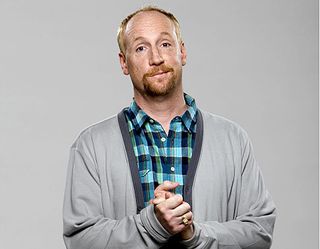 Matt Walsh is finishing up work on his first feature film as a director, the highly improvised movie, High Road.

So naturally, The Comic's Comic spoke to the UCB comedian about it on 4/20. Or was it just coincidental timing?

"It is interesting numerology," Walsh told me. "We're still finishing the movie. We're in the sound mix right now. A little color correct and we're done."

Audiences will get to see the finished product next weekend when the film premieres April 29 at the Newport Beach Film Festival. The film stars James Pumphrey as a man caught between his girlfriend (played by SNL's Abby Elliott), his band, and dealing his weed. The rest of the cast includes Rob Riggle, Lizzy Caplan, Joe LoTruglio, Rich Fulcher, Horatio Sanz, Dylan O'Brien, Zach Woods, Matt Jones, Ed Helms and Kyle Gass. Here's the "red-band" trailer (red-band = swearing and other things making this video NSFW)!

How did the making of High Road differ from the UCB's first film, Wild Girls Gone? "Good question. How is it different? I think we have better technology. We have better cameras now. This one was shot more like a documentary. We had d.p.'s who had shot documentaries…so the approach was more documentary-style."

For structure, did you write a full script, just an outline, or did you have the actors treat it with the UCB "game" approach? "We had roughly 65 scenes and each scene had a paragraph of plot and character count: Who's in the scene and when they come in. And then for the comedy's sake, we had game in each scene so characters could find what was funny in each moment that the players could play around in."

As you're finishing it now, how do you feel about using that process? "I'm very happy. I'm very fortunate to have a really talented, good-looking cast. They're all good on camera and they improvise dialogue that I never would have been able to write. And each character has their own certain voice and idiosyncrasy that they bring to it."

Did that process work the same as if you'd used a fully-written script?

"We did a lot more rehearsal before we began shooting. We spent two weeks in the theater just working together. We improvised scenes that weren't even in the movie, but it helped solidify the characters and their backgrounds. Dylan (O'Brien), he had no experience with improv, so I put him in UCB intensive."

Speaking of the UCB Theatre, what's the latest scoop on the UCBEast venue in New York City's East Village? "Last I heard, two or three weeks, it'll be open. Fingers crossed. What with all of the red tape."

Yeah. I've seen the local news reports, and it seems as though the neighbors are really nitpicking over everything. The curtains. The "Hot Chicks Room" sign. Yikes. "It's been a nightmare. That combined with the bureaucratic process…it's a very strenuous process to get through."

I'd be remiss if I did not congratulate you on Veep (HBO ordered a first season of the new sitcom, starring Julia Louis-Dreyfus as the Vice President, with Walsh playing her spokesman). "Oh, thank you very much. I'm very excited about that."

When does that go into production? "We start shooting in September, right after Labor Day."

Will that impact your role on Outsourced (Walsh plays the American boss,  Jerry Stern, on NBC's sitcom set in India)? Or have you found out what's going on with that series? "No. I heard that show was on the bubble. We'll find out in May if that comes back as a midseason replacement or anything else."

Do you still find people confusing you for Louis CK? "Occasionally I do get a mistaken identity. But I'm not as funny as him."

You're funny in different ways. "Well, thank you, I'll take it."

You cannot compare the two. It's like comparing improv and stand-up. "Apples and oranges."

Yeah, but that's comparing you with Jon Glaser.

High Road premieres April 29 at the Newport Beach Film Festival. It's also scheduled for screenings at the Seattle International Film Festival in May.

“My Life Is A Joke”: Five comedians talk about getting a boost of their OWN from Oprah

One thought on “Matt Walsh talks about directing his new improvised movie, “High Road,” plus other related UCB news”