It only seems like Broadway has been taken over this spring by comedians. Chris Rock. Robin Williams. Jim Gaffigan. A musical from the South Park guys. Colin Quinn and Pee-wee Herman just wrapped up their shows. Kathy Griffin made a brash short-term bid for a Tony, too. 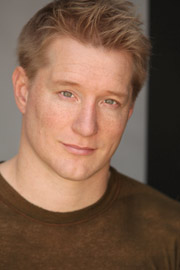 But none of them have performed on Broadway as much in 2011 as Bill Dawes had, and he's often following up his shows with late-night stand-up comedy sets around Manhattan (just before midnight tonight, he'll be on the bill at Gotham Comedy Club). Dawes plays NFL Hall of Fame halfback Paul Hornung in the Broadway production of Lombardi, which stars Dan Lauria as the legendary coach of the Green Bay Packers and Judith Light as his wife. With more than 200 shows under their belts, Dawes says they've got the longest-running Broadway play right now.

As a stand-up, Dawes has toured military bases with the USO, opened and written for Jamie Kennedy, and often works the Laugh Factory when he's in Los Angeles.

I spoke with Dawes earlier this week about pulling double duty as a stand-up comedian and Broadway actor. Disclosure: Dawes and I played college football together.

How does it feel to put on football pads again every night? "It feeels good, man. Luckily. My biggest fear was that people wouldn't believe me looking like a footbal player."

I believe you. "No, a real football player! But no, that was my one big thing. Because I hate when you see someone like Leo DiCaprio in Basketball Diaries and say, Leo, 'I know you can't play basketball!'"

And how does it feel to be back on Broadway? You'd done it once before, right? "I understudied a role. This time, it's cool because, this just goes to show, I was involved, we were all invoved with the creative process in developing the play. It wasn't from scratch. The play was written. But it changed significantly between first rehearsal and now. And I'm a comic, so I'm a writer and so I was constantly meddling. I knew things about Paul Hornung. Like he's a consummate name-dropper. When I met Paul Hornung, that's how he was. It was cool. He's 75 and like 325 pounds now. He's a winker and a slapper. We had mimosas and he told me some stories. I'd read his book, and he told me stories just like I'd read."

Having the Packers win the Super Bowl certainly must have helped your show. "Well, we haven't had Aaron Rodgers stop by yet," but several of the retired Packers who had played for Lombardi have come to the show. "We had some magical juju working."

Some coincidence, too, that your Broadway gig comes just as so many other stand-ups are taking to the stage, eh? "It's pretty crazy. I talked to Chris Rock very briefly about it at a restaurant, and I asked him. He said, 'This is my first show ever! I never even did a show in school!' I saw him. He's good. It's not an easy role, he's up with some vets and he holds his own. Both 'Bengal Tiger' and 'Motherfucker with the Hat,' theybre both good plays."

"And I'm still going up at Gotham like once a month, and Times Square (Arts Center) like four or five times a week. I'm trying to branch out. I have a weird alternative bent that I'm trying to explore. I came up doing big bold urban, snap, listen to me comedy. I'm not up there with my memo pad and my glasses."

Doing stand-up even after doing Broadway four or five times a week? "People say it must exhaust you, but to me it's a release. Once in a blue room you get a bad crowd. But nine times out of ten, you have a structured routine and a choregoraphy, and then you go out to the comedy club and there's people from all over the world, and you can just talk to them and riff. Someone will bring their dog in with them lying next to the stage. And I'll just riff on that. I have fun. It's not going to get me a development deal. But it's fun."

One thought on “Back in football pads, comedian Bill Dawes plays Paul Hornung in Broadway’s production of “Lombardi””