Skip to content
December 3, 2022
Interviews / Meet Me In New York

Two-man comedy can be a tricky thing to pull off, especially if the two men are not brothers, or do not possess an obvious physical dynamic (a la Laurel and Hardy, Abbott and Costello). Team Submarine manages the feat quite well, though. Nate Fernald and Steve O'Brien, pictured here with friends in ICP makeup by David Angelo, are New Englanders who met in Chicago and formed Team Submarine before moving to NYC. David Cross and Bob Odenkirk asked them to open for them when they reunited for live sketch comedy at the Just For Laughs Chicago festival. And starting this Saturday, Team Submarine will host a monthly show at the Creek and the Cave in Long Island City. 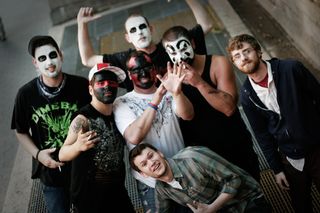 Let's get to know them in our first team edition of Meet Me In New York, shall we?

Arrival date in NYC: May of 2008.
Arrived from: Chicago.
When and where did you start performing comedy?
STEVE: I started a sketch group in NH when I was in 8th grade with some friends.  We started doing a monthly show in the basement of a church and then played community centers and opened for a few local bands.  Nate and I met in Chicago and started doing a weekly show that we ran out of a small classroom.
NATE: I started a sketch group in college. The group was called "Sketch 22." And I'm pretty sure there are about 30 other college sketch groups with the same name.
What was your best credit before moving here?
STEVE: I think our best credit was probably performing on The Sound of Young America.
NATE: I still think it was opening up for an improv troupe made up entirely of women over 60 called "Over the Hill-arious."
Why did you pick NYC over LA or anywhere else?
STEVE: NY was our choice because we knew we wanted to perform live as much as possible.  We are also closer to our families in New England.  A lot of people don't know this but Nate has five children living Massachusetts.
NATE: I honestly just didn't want to have to deal with owning a car.
How long did it take to get your first paid gig in NYC after moving here?
STEVE: We don't do it for the money. We do it for the pizza.
NATE: After about six months of being here, there was a show that gave us $20 that we had to split two ways.
How is this scene better/same/worse than the scene you moved from?
STEVE: Chicago is the greatest place in the world to perform comedy.  The scene is relatively small compared to NY so everyone knows each other and it's really supportive.  If you couple that with the fact that there's no pressure to "make it" in Chicago, it creates an environment for people to create some truly original stuff.  NY on the other hand has provided us with a lot of opportunities we wouldn't have had before.
NATE: I feel like the audiences are very different. Like, in Chicago audiences would go to a show and be excited to be there. But it seems like a lot of shows in New York, audiences begrudgingly show up and are like "Prove me wrong for hating you!" You have to work a lot harder here.
Do you already have an "only in New York City" moment yet?
STEVE: I took my girlfriend out to eat on Valentine's Day and we witnessed a man pull down his pants and wrap his genitals up in a black plastic bag.  It made us fall more in love.
NATE: I saw a woman in a Lexus ask a fire truck that was putting out a fire to move because she "has to get down this street."
What tip would you give to any comedian who moves here?
STEVE: It can be a very intimidating here but try not to let that affect your performance.  Give 100% every time you're up on stage.  This place seems mean but I've found if you smile first people usually smile back.
NATE: Honestly, giving 90% is probably fine. And don't smile at people unless you want them to follow you for six blocks.
Where do you see yourself five years from now?
STEVE: I see myself leading a band of rebels across the wasteland that was the United States against the mighty Humungus in search for more petrol.  That's just what that gypsy told me was going to happen though.
NATE: Asking this very blog if you'll promote my one man show.
In the meantime, I'll plug their new monthly show, which debuts 10 p.m. March 19 at the Creek and the Cave in Long Island City, NY, with special guest Jared Logan. You can also buy their album Correctamundo! on iTunes. And here's a short video to give you a taste for their taste in comedy. Roll it.