Do you know Donald Glover only as one of the stars of NBC's sitcom, Community? Do you know Glover as a member of the sketch/improv comedy group Derrick? Yes and maybe.

But do you also know Glover as rapper Childish Gambino?

Well, now you do. Here he is with his track, "Freaks and Geeks," out today as a music video directed by Derrick cohort Dan Eckman. Note: Language is most definitely Not Safe For Work. 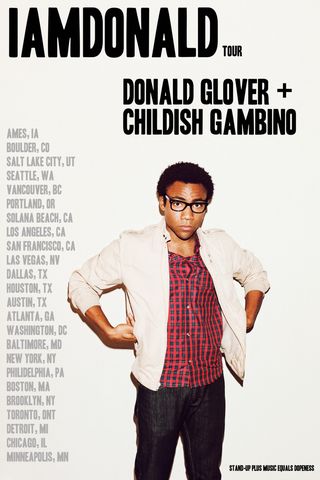 What do you think? He's also taking his act on the road this spring on a nationwide tour, starting April 16 in Iowa through May 19 in Minneapolis.

Tickets go on sale next week.

I was just having a conversation with a comedian last night about careers, and he said he thinks the key is to just to do everything you can and see what sticks. Clearly, whatever Donald Glover seems to throw down is very very sticky.

4 thoughts on “Donald Glover, rapping as Childish Gambino, in the music video for “Freaks and Geeks” (and on tour)”