At the end of any sitcom episode from the mind of Chuck Lorre, there's a blink-and-you-miss-it moment in which Lorre posts a note to the audience. It's his sit, Ubu, sit. But with more words. And during this eighth season of Two and a Half Men — otherwise known as the show you love to watch Charlie Sheen pretend to drink too much and have too much sex with hookers, in between the times when he's actually doing those things — Lorre has used some of his vanity cards to address the real-life escapades of his star actor.

Here are three of Lorre's more direct notes about Charlie Sheen from this season.

Last night, Lorre hoped that his healthy lifestyle would reap rewards in the end: 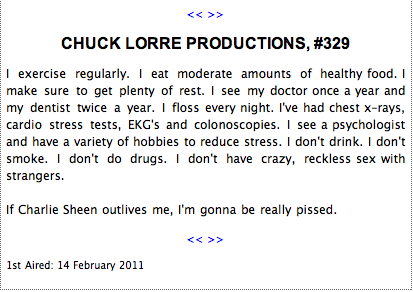 A month ago, Lorre tried to be more subtle about it. 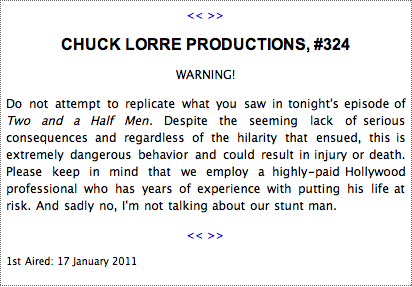 And back in November, when Sheen was making a prostitute fear for her life in New York City, Lorre addressed it thusly: 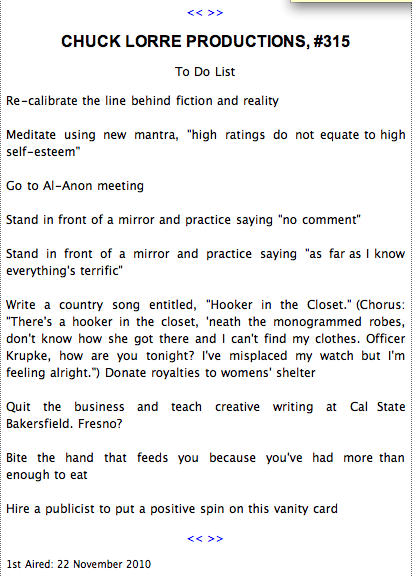 You can look up all of the Chuck Lorre Productions vanity cards here.

Don't know how I missed this the other night, but Dana Gould was on Conan last week, and amid the relationship humor of being married, and adopting kids from China — "in China, every town is Chinatown" — I enjoyed his choice take on "reality" television.

“Best Time Ever” is over at NBC, but Neil Patrick Harris may live to showcase again