Stephen Colbert has gotten portraits of himself into galleries, restaurants and museums. How about in your home? 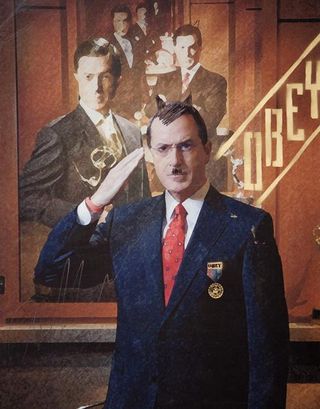 Portrait 5, Stephen (s), the fifth in the series, could be yours for a price. Colbert and Comedy Central announced today that it'd be auctioned off on March 8 by The Phillips de Pury & Company to benefit DonorsChoose.org, an online charity connecting donors to classrooms in need. You can see the painting beforehand from Friday, Feb. 25 through Monday, March 7 at 450 West 15th St., in New York City. The auction itself will be taped for future broadcast on The Colbert Report.

What makes this one special is its enhancements. Shepard Fairey spray-painted his iconic "OBEY" on it, followed by a horns-and-mustache Sharpie treatment from Andres Serrano, a glance askew by Frank Stella, and an autographed signature from Colbert himself.

Colbert said: ‚ÄúTurns out I‚Äôm an artist. That finally explains why I cut off my ear. Many thanks to Phillips de Pury for including this portrait in their auction. I am honored to be sold in the prestigious manner usually reserved for foreclosed homes and champion hogs.‚Äù

More reviews, interviews with Tim and Eric on tour