The new season of Britain's Got Talent has begun the initial audition phase across the pond, and the early hullaballoo is over the harsh criticisms coming from one of its new judges, stand-up comedian Michael McIntyre.

For those of us in North America who don't know the name Michael McIntyre, the 34-year-old hasn't made much of a dent here, his first try coming in the summer of 2007 when McIntyre was presented to the industry as one of the "New Faces" in Montreal's Just For Laughs festival. 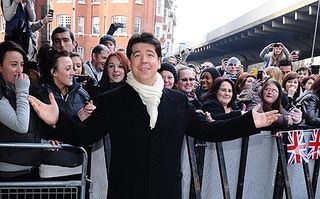 His energetic style caught on in the U.K., however, where he quickly rose to the ranks of selling out arenas — his second DVD, Hello Wembley, sold more than 1.4 million copies. He won the British Comedy Award for Best Live Stand-Up Comedy Performer in 2009, and followed that in 2010 with the Best Male TV Comic, hosting BBC1's Michael McIntyre's Comedy Roadshow. And now this year, he was named to become one of the new judges for Britain's Got Talent, sitting alongside longtime BGT judge Amanda Holden and America's Got Talent export David Hasselhoff. In past seasons, Holden has sat between Simon Cowell and Piers Morgan. Cowell's working on his U.S. version of The X Factor, while Morgan is busy trying to attract viewers to his 9 p.m. CNN hour that replaced Larry King.

Sources have told the British press that McIntyre is supposed to fill the Simon role. Obviously the Hoff is going to still be the Hoff, so sure, that sounds reasonable enough to assume/presume. The British tabloids jumped all over the notion of McIntyre as Mr. Nasty after he allegedly made a 9-year-old comedian cry during his audition. McIntyre called up The Mirror to explain himself, saying, among other things:

‚ÄúI am not being ruthless and shattering people‚Äôs dreams ‚Äì that‚Äôs the opposite of what I want to do. I took the job because I love the show and I have spent a month trying to make people‚Äôs dreams come true. Ruthlessness is not something that comes easily.‚Äù

“Late Night with Dana Carvey,” the show that almost wasn’t Conan O’Brien’s in the first place