Having already posted two big SNL sketches from last weekend on Saturday night, I wanted to step back from the show and come back to it later. So here we are. Later.

Within a few seconds of watching Republican Congresswoman Michele Bachmann's alternate response to President Obama's State of the Union address last week, I knew immediately that Saturday Night Live would be putting Kristen Wiig in the cold open to ice this crazy lady and then some. And there she was. But how would SNL play it? They decided to try giving Bachmann (Wiig) a second shot at her response. Oops, she's doing it again. It gets a little absurd at the end, but I came away from it wishing it had gone for an even weirder, less, well, straight-ahead take. The original already was ridiculous enough. Still, this is much better than most of the show's previous political cold opens. So. Good start.

More and more, SNL is relying on cheap sexual visuals, and this ad for Estro-maxx is no exception. Look at the man-boobs on Bill Hader and Fred Armisen. Look at Paul Brittain and Bobby Moynihan in drag. I get it. We all get it. First, pubic hair for wigs. Now it's man-boobs. Aren't men with lady parts funny? That's the premise, set-up and punchline here. The only real variation came in the reading of the small print by Wiig, but I don't think many people were paying attention, because they normally don't.

If they're going to continue to do sex jokes, then it's better when there's a sense of playfulness to the affair, which is what we saw in the peek inside Nickelodeon's vault of old "Mr. Wizard's World" episodes. Hader plays Mr. Wizard, and his students (Nasim Pedrad, Eisenberg, Kenan Thompson, Abby Elliott) learn about static electricity by rubbing balloons on themselves and each other. The way Chris and Claudette (Eisenberg and Pedrad) learn the new excitement of rubbing each other, as it were, while the other students and Mr. Wizard are stunned and shocked, is amusing. Things escalate from there. "I want to learn science in the shower."

Next we see an episode of the game show, Don't Forget The Lyrics, with Jason Sudeikis as host Mark McGrath. Eisenberg plays 22-year-old contest Kenny from Rhode Island, a part-time student who got in trouble at his job at Domino's. First up: "I Love Rock N Roll," by Joan Jett. He's jumpy but did, indeed, forget the lyrics. Sudeikis as McGrath cracks about being on a 2 p.m. show on Vh1. "It's all happening." Kenny doesn't remember McGrath's band's song, "Fly." Instead, he blurts out the fact that he has an extra testicle? Or that he gets a boner at the movies? Somebody's writing staff has sex on the brains, y'all.

After a break, we get another glimpse at elderly longtime WXPD-TV reporter Herb Welch (Hader), whom the anchor (Suedikis) notes is celebrating his 58th anniversary with the network. He's interviewing a college student (Eisenberg) about a break-in at the dorms. The same dynamic as before: Herb mumbles and pushes the microphone into the face of his interviewee; Herb yells at the anchor for trying to tell him how to do his job; Herb tricks them into thinking he died. Nice death face! It works for what it is.

An SNL Digital Short: It's The Lonely Island, doing "The Creep." Not exactly instant classic, but the addition of musical guest Nicki Minaj and filmmaker John Waters does give it a little something extra.

Nicki Minaj had big pink hair and and even bigger feathery dress on, but. Butt. All I wondered was: How do you do that? "Right Thru Me."

Weekend Update with Seth Meyers joked about Comcast taking over NBCUniversal: "And I have to say, things are better already. Seriously. I have to say that."

As Egyptian dictator Hosni Mubarak, Fred Armisen blamed the lack of Internet in Egypt on Time Warner, instead of on the massive protests there. See. Comcast already has changed SNL jokes. They're making them making fun of the competition! Oh. Wait a second. My Internet is weird. Time Warner???

To comment on getting snubbed by the Oscars, Tyler Perry presents Tyler Perry (Thompson), who noted that the nominated films tended to focus on white people problems, and also how much money his films have earned. Nice dig on Eisenberg's Adventureland, too: A white kid who's sad because he has a job! Nice job, by the way, of hitting multiple targets in one bit.

From that Tyler Perry bit, we then go here. Time for another look into the movie vault, introduced via TCM's Robert Osborne (Sudeikis), and this sketch certainly got people talking on Twitter and elsewhere. First off, it's about blaxploitation films of the 1970s. Secondly, the "Bride of Blackenstein" features musical guest Nicki Minaj as the bride. Eisenberg plays Igor to Jay Pharoah's Dr. Blackenstein, while Thompson plays Blackenstein. And the joke is how Nicki Minaj has a big butt and a smile. That girl is poison! Even the white riot mob led by Hader is taken aback by her backside. The live studio audience sure whooped it up.

Samberg plays the head of MTV programming to explain the outrage over its adaptation of the British series, Skins. So they lost sponsors over the kiddie sex scenes. They can get new sponsors! With extra product placement. Like Kennedy Fried Chicken. Yeah, it's a knock-off of KFC. Fun fact: My neighborhood goes even deeper with JFK Fried Chicken. Yep. That's right. A knock-off of a knock-off. But their hot wings are cheap and delicious! Anyhow. Back to the scene, in which Elliott, Eisenberg and Brittain incorporate the new sponsors into their dialogue. Walzer Toyota, anyone. Pedrad plays sexy mom who shops at The Sweater Dump. The jokes are all very New York City. That's not the completely weird part. There's something completely weird about a scene in which all of the characters are shown standing in one spot delivering their lines. You couldn't have them move around the room at least a little bit?

Spa Talk with Tyla Yonders presents a new character for Wiig to get weird. Married couple Daniel and Denise (Thompson and Elliott) don't seem as though they're relieving their stress, as they yell at each other while Wiig rubs bird poop on their faces. Then there's an Italian family (Eisenberg, Vanessa Bayer, Moynihan) who also get weirded out by Tyla Yonders and her technique. Eisenberg, btw, doesn't seem to have an issue with people seeing his tighty whities.

For Nicki Minaj's second song, she kept her Bride of Blackenstein wig. She's also wearing what appears to be Ed Hardy's version of the Mr. Goodbody suit. Oh, she also rapped and sang. I wish I could have this moment for life? Really. This moment?

Before we go, we end the episode with a dick joke. Ladies…El Shrinko. Samberg and Eisenberg claim they have to take pills to "shrink their weiners." Pedrad, Bayer and Wiig play women hired for the infomercial, who wonder what they signed up for. Is this the best we can come up with?

Next week is former SNL great Dana Carvey on the hosting tip, so that should be interesting. 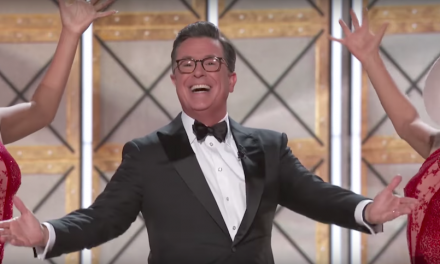 Highlights from winners at the 2017 Primetime Emmy Awards

NBC putting Kenan Thompson in primetime with The Kenan Show