Here's something for fans of Freaks and Geeks and Undeclared to freak out and geek out about while they're waiting for the reunion panel in March at the Paley Center in Beverly Hills. 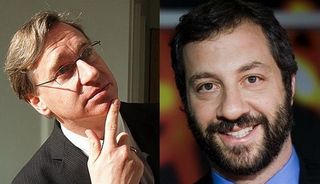 For the next three weeks, Paul Feig and Judd Apatow will appear on IFC for exclusive sit-down interviews with Comedy Death-Ray's Scott Aukerman during the cable network's Monday-Wednesday comedy block from 10-11:30 p.m.. IFC airs rebroadcasts of both Freaks and Geeks and Undeclared.

Feig and Apatow will chat with Aukerman individually and together as follows:

The interviews appear in minute-long interstitials throughout the night. Extended portions not seen on TV will appear later online at IFC's Comedy Death-Ray site. Like this one!

Slightly related: If you're in Austin, Texas, in March for SXSW, you'll be able to check out IFC and Comedy Death-Ray together in a live comedy showcase at the IFC Crossroads House. So mark your calendar accordingly, people of SXSW.

The State has a complete DVD release date

Margaret Cho’s limited-time offer for a “sexting bundle” of her CD and unreleased songs: Pay what you want!