Gwyneth Paltrow has hosted before. Remember when everyone made a big deal because Ben Affleck made a surprise cameo, and when we learned that Paltrow and Maya Rudolph were besties? Well, in 2011, Affleck isn't walking through that door, and it's doubtful that Rudolph is walking through that door, either. We were reminded more than once by everybody that Paltrow had sung Cee-Lo's 2010 hit, "Fuck You" — er, I mean, "Forget You"? — in a recent episode of Glee, so we were to fully expect her to sing this in a duet with Cee-Lo. You know, because she also was in the movie musical, Duets?! Whenever you're told to expect something, lower your expectations. That's what I say.

Now here's what I recap.

We open cold on FOX News and the title card says the network is "Embracing Civility." Ooh, I wonder what that looks like. Won't have to wait long to find out, as Kristen Wiig appears as Greta Van Susteren to anchor the special. Hold on. Have to up the volume on my TV to hear as Wiig's Van Susteren is barely audible with her lips moving from side to side like that. OK. Better now. Bobby Moynihan plays Sean Hannity. Nasim Pedrad shows up as Michelle Malkin, and Jason Sudeikis returns to portray Glenn Beck once more. Beck doesn't want to be part of this, at all. Since they're having such a hard time toning down their rhetoric, they also invited someone from CNN: Democrat James Carville (Bill Hader). Yeah, that should do the trick. Looks like Jim Carrey has more than rubbed off a little bit on Hader, as his version of Carville tonight completely resembling and impersonating Carrey's character in The Mask. Wouldn't everyone agree? Everyone is agreeing. Moving on. Oh, Abby Elliott is here, too, as Rachel Maddow, using Beck's chalkboard.

Was Paltrow's monologue full of goop? She notes what has changed since she last hosted: She has moved to Britain, and starred in the movie Country Strong, and sang her song at the Country Music Awards. And then she made fun of country music. Wait. Sudeikis strolls onstage as Kenny Rogers to test her knowledge of country music. Duet time! "Islands in the Stream." She doesn't know her lyrics. Wiig shows up midway for a walk-through cameo as Dolly Parton. Cee-Lo even shows up to interrupt. Yes. We all know and have gone on the Twitters and the Facebooks to say how his size is proportionately disproportionate to other people's proportions. We get it. SONG PARODY COUNT: 1

SNL decides next to poke fun at NBC's own promos for new show The Cape with promos for spin-offs. Which. Wait a second. I know at least one person in my Twitter feed already did this. If only Twitter could let me search easily to find that person. In the meantime, Pedrad portrays "The Scarf," Hader gets "The Scarf," Andy Samberg is "The Leg Warmer," and Kenan Thompson in "The Sleep Mask," Wiig in "The Bolo Tie," Fred Armisen in "The Water Bottle Holder," Sudeikis in "The Scrunchy," and Moynihan in "The Spanx." It's all based on the visuals, you know. Used to be about the ball bearings. But that was before you were born. Not it's all about the visuals.

Another edition of "Secret Word," a supposedly old game show from the 1960s. Hader returns as the host. More importantly, it's time for Wiig to do her Broadway turn as Mindy Grayson once more. Paltrow is also in the game, with Thompson and Taran Killam as their playing partners. Paltrow confuses her partner for her "butler." Get it. 1960s? This time they switch up Wiig's schtick by having her pretend to play charades first before getting to her bad habit of saying the secret word each and every time. Of course, in even a slightly unreal world, no TV show would ever invite back a celebrity who didn't understand the rules the first time. So that's why this is a recurring sketch on SNL. Obviously. Rules do not apply here.

Hold on. SNL Digital Short. And this short is already so cool, I have a feeling it was filmed last week but something held it up from airing then — I have that feeling because as Samberg walked into a bar and saw Pee-wee Herman and then Anderson Cooper, I remembered Pee-wee saying that he was filming things with Cooper last week before he left NYC. Did someone say tequila? Tequila! Uh oh. Intervention time. Uh oh. Shots!

And we're back. Time for a bar mitzvah with Jacob (played, obviously by non-man Vanessa Bayer) with her dad Armisen, and they locked up a rockin' guest in Taylor Swift (Paltrow). SONG PARODY COUNT: 2. Dad is embarrassing Jacob. He also got Jay-Z (Jay Pharoah). They're all rewriting their hit songs with Jewish lyrics. Awwww. Pedrad jumps in as Alicia Keys? OK. Makes sense considering SONG PARODY COUNT: 3. Here comes Katy Perry (Elliott). SONG PARODY COUNT: 4. And Cee-Lo shows up for his second appearance before his first musical appearance for SONG PARODY COUNT: 5. "Fuck You" as "For Hebrew"? Umm. Cut to commercial.

Rut-ro. We're back from commercial and they're still parodying Cee-Lo's "Fuck You," this time in a record studio office with Paltrow welcoming Sudeikis and Samberg, who inform her that the FCC will fine them if they don't censor the song. "What the forget are you talking about?" she exclaims. And thus begins the revolutionary idea of an SNL sketch to introduce a musical performance. Forget. Bullsugar. Paul Brittain gets chewed out and threatened with his "Dixie cup" for interrupting to say that Cee-Lo was here for his third appearance in the show before his first actual song. Sasquatch = ass? I don't think so, but let's keep recapping. And Nintendo = word from Mark Twain's time. We get it. Cee-Lo has a big forgetting watch on his wrist, doesn't he? Did you know what "Country Strong" really means in this world? Oh. My. Whatever Word is Supposed to Replace God. They do say "pussy," though. And somewhere, everyone is thinking of Jenny Slate. This was either the best and/or the worst way to introduce an actual musical guest in SNL history, depending upon what second you chimed in.

Yes. While you're focused on Cee-Lo saying "Forget You," we all noticed that his backing band was all-lady. We also noticed that SNL was afraid to let him sing the actual song. Which is probably why we had that sketch to introduce it. Duly noted.

Weekend Update opened with Seth Meyers mocking Sarah Palin for talking about "blood libel." But then. That gun joke. So…done before. By…so many comedians.

Since we don't have much 2012 presidential campaigning to talk about yet (as the media has pointed out), former NY gubernatorial candidate Jimmy McMillan (Thompson) is here to announce his candidacy because the rent must be too damn high everywhere, right? As a Republican? Because the deficit is too damn high. S'ok.

Here's something we haven't seen in a while. Weekend Update correspondents reporting from the field. Of course, The Daily Show does this all the time on Comedy Central. But SNL was doing it decades earlier. This time, it's Vanessa Bayer reporting on the Golden Globes. With Christina Aguilera (Pedrad) and Cher (Hader) from Burlesque on the red carpet! Moynihan shows up as Chaz Bono for some transgender jokes.

Garth and Kat (Armisen and Wiig), aka the only thing on SNL that seems to have authorization to be improvised, returned to Update in tardy Christmas vests. This time, Paltrow shows up as their supposed songwriter. SONG PARODY COUNT: 6-7-8-STOP THE COUNT. They even start one song on cue with music. This is helpless. I used to love this. Now I just wish they mixed it up a little bit more than being on the same page for one line. Let Wiig lead the way, perhaps! Why does she always have to take her cues from Armisen?

And this "Constitution Corner" thing about the Second Amendment and what the Founding Fathers would think just comes across as a watery watered-down version of Really?!? C'mon, Seth. Give it even more teeth. Sink your teeth into it! Chew it up!

Remember how Paltrow won awards for doing Shakespeare on film? So why not go to that well again with "The Taming of the Shrew" from the legendary Globe Theatre back in olden times. Moynihan, in traditional garb, introduces the production. But what would "coming attractions" be like back then? Hader provides the voice-overs for Romeo and Juliet (with Killam and Paltrow), wait RESTART THE SONG PARODY COUNT: 10 for bringing Black Eyed Peas into this for no damned good reason. Sudeikis, silence your falcon! Did you know that Hader's movie voice-over voice is the same as his creepy Dateline NBC voice? The more you know. During the "Hamlet" preview, Pharaoh's olden-time character shouts at the stage (oh, those "I don't know what they called 'those' 'those people' back then, so how can I find the appropriate way to judge retro racist stereotyping?). This is "false history"? Egads. Liked the pitch. Did not care so much for the execution.

We're getting some "lost episodes" of Fresh Prince of Bel-Air. Saw so during the ad break. To celebrate the 20th anniversary of the show, now on DVD, of course. Pharoah plays Will Smith. Thompson plays Carlton. Who would play the other characters, though? Paltrow shows up in an episode as a police officer. Hmmm. Another solid premise, without enough of a payoff.

They're doing ESPN Deportes, aka the Spanish-language version of ESPN, and hold the telefono, because Brittain gets a lead role in this sketch alongside Paltrow.  They play it pretty straight, speaking Spanish and then emphasizing American names and phrases, and then cut to a locker room with Armisen interviewing Boston Celtics Kevin Garnett (Pharoah). With an ad for Tres Equis featuring Killam and Pedrad. And Moynihan! He plays foreign kids!

When we come back, Cee-Lo Green and his ladies have a second song for us. It wasn't a cover of a Robert Palmer song. There were no cuss words. So I have nothing else to say here.

So CNN isn't happy with Kathleen Parker co-hosting with disgraced former NY Gov. Eliot Spitzer, is that right? So that's why SNL is closing with auditions for his replacement. Killam introduces the scene as a producer. Hader is Spitzer. First up: Christiane Amanpour, who actually already has a job on ABC. Pedrad plays her. Paltrow is Heidi Klum? She still cannot read English. There's an in or out joke in there somewhere. Welcome former NY Gov. David Paterson (Armisen). Yowzer yikes.

You know. I'm not willing to believe some of the immediate reactions online from 1 a.m. that called this episode terrible. It wasn't great, but there were some definite moments in here that people loved. And I'm still people, too. Where was all of the cast during the good-nights, though? Looked like they were shrinking toward the back or not even there! Weird. Usually the stage is so full of people so happy to be there at the end. Not this night. Hmmm. We can debate this all we want, which for me, is no debate at all. See you next new episode! 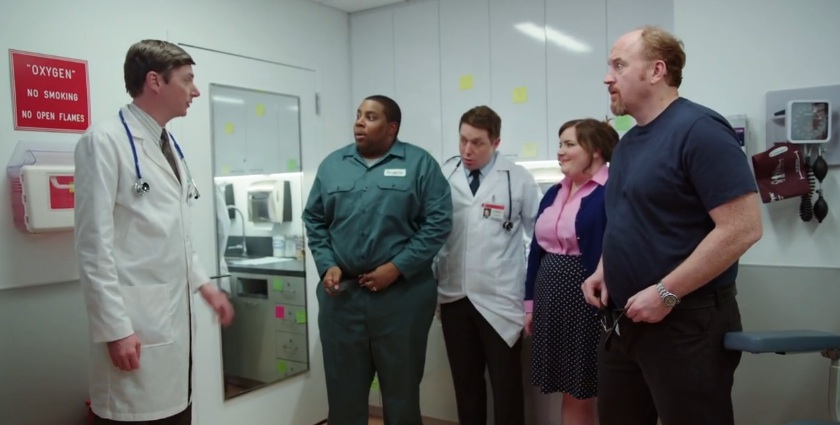