If you're on Twitter and enjoy reading funny things, then odds are strong that you likely already know and follow the quick-hit offerings of Rob Delaney @robdelaney. If you read The Comic's Comic, then the house won't even take your odds, because I've mentioned his ribald brilliance on the Tweets multiple times. 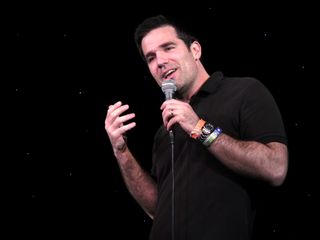 But what happens when you see Delaney in person, spinning a 45-minute yarn in real life, in real time? That's what you get in "Naked and Bloody," which Delaney is quick to point out is not just a one-man show. Only the worst people do one-man shows, he says in a short stand-up routine before he regales the audience with his story.

Delaney opens his narrative arc directly at the title's tipping point, with himself bleeding and revealing all of his naughty bits about nine years ago, precariously perched on a wheelchair in jail. He goes on to explain what he did to get to there, and what he did to get better. Along the way, you'll hear him talk glowingly about "the fun" and "great people" he encountered, even as he's describing scenarios that don't sound like they'd be much fun to experience yourself. "Naked and Bloody" can be looked at as a cautionary tale, a shining beacon of hope out of the darkness of life, perhaps both, or even just an obscenely funny story about the lowest points of Delaney's own young life, and how he has emerged a different man because of it. A seemingly normal tall, dark and handsome man to look at, with an even taller, darker and more beautifully absurd and raunchy sense of humor inside of him.

Delaney has performed his show in Los Angeles and Seattle, and last night performed in New York City's UCB Theatre to an audience packed with some of the funniest people utilizing Twitter.

He'll bring "Naked and Bloody" next to San Francisco for SF Sketchfest, and he says he'll continue to share his story with audiences when and where the situation fits, and enjoys telling the story because he says it continues to evolve.

I enjoy watching Rob Delaney continue to evolve as a comedian and a man, and you should demand to experience him for yourself in person in a theater or comedy club near you.

Review: Patton Oswalt, “I Love Everything” on Netflix