In case you're not following season 22 of the FOX animated classic, The Simpsons, then you're not NYT reporter David Itzkoff (who's not only watching but taking screencaps!), so let's get you all caught up with the new kerfuffle. 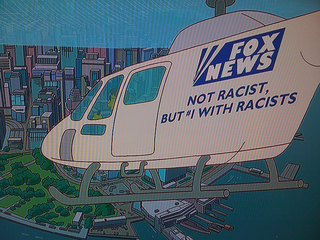 Last week, the team took a crack at sister network FOX News in the scene following the opening credits, showing a FOX News helicopter with the tagline: "Not Racist, But #1 With Racists." See picture.

Of course it's a joke. FOX News doesn't have helicopters!

Of course, Bill O'Reilly cannot take any joke that is not coming out of his own blowhardy lips, so he called The Simpsons "pinheads."

Pinhead is an old-timey insult that only old people know (and only serves to remind viewers about his latest get-himself-richer quicker book). 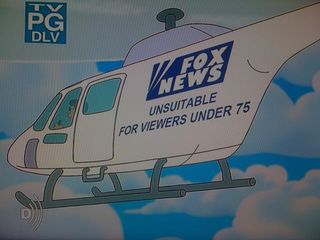 So the producers over at The Simpsons — who usually wait months between the writing, animating and airing of episodes, as opposed to the too-fast work by South Park's crew — switched out the opening gag for a second FOX News chopper gag.

"FOX News: Unsuitable For Viewers Under 75"

Hahaha. Get it? It's funny because it's true. My maternal grandmother only started watching FOX News after she turned 75, and now she's dead. Spoiler alert: Also unsuitable for viewers older than 75! Thanks a lot, FOX News. You scared my grandmother to death.

Who knows what O'Reilly will have to say about this? Who cares? E.P. Al Jean told Itzkoff that it's all generated some publicity for the show, which means I hope Jean gets Itzkoff a nice holiday bonus this year. You're all caught up now. The end.

Neal Brennan on race, brothers in comedy, and the competitive spirit of Twitter

One thought on ““The Simpsons” thanks Bill O’Reilly for making the show relevant again, if only to mock FOX News anew”