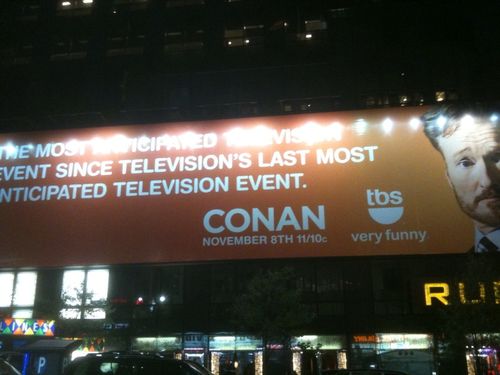 Jeff Zucker's reign at NBC is almost over, and last night, he was supporting his wife, Caryn, who along with comedian Bob Saget produced an annual benefit show for the Scleroderma Research Foundation called Cool Cuisine, Hot Comedy, at Carolines on Broadway. See WireImage photos from the event. This is what greeted Zucker as he crossed Broadway to head into Carolines. A giant Conan billboard. Zucker didn't walk the red carpet, so I didn't get to ask him if he planned to watch any TV last night, but it seemed almost everyone else who was awake was keenly aware of Conan's debut, too. You couldn't avoid knowing about it. Not even Zucker could avoid it.

The ratings for Conan's debut on TBS were big. How big? Big enough to dominate everyone else, especially his head-to-head demographic rivals and friends at Comedy Central in Jon Stewart and Stephen Colbert.

Here are last night's ratings for selected late-night competition, which excludes the numbers for Chelsea Lately on E! at 11, Nightline on ABC at 11:35, and Jimmy Kimmel Live after midnight. I'll break it all down for you later as the viewership shakes out.